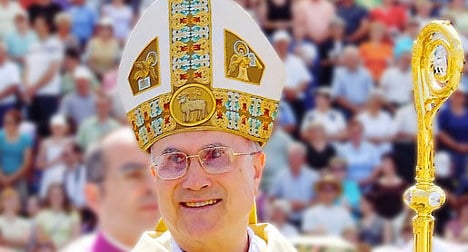 Germany's Bild Zeitung newspaper said the Vatican was investigating a €15 million purchase of convertible bonds by the Vatican bank in the Italian company Lux Vide owned by Ettore Bernabei.

The 79-year-old Tarcisio Bertone, the Vatican's former secretary of state and then head of the bank's oversight committee of cardinals told Adnkronos news agency that the deal with Lux Vide had been regularly approved.

"The IOR convention with the company Lux Vide was discussed and approved by the committee of cardinals and by the supervisory board at a meeting on December 4th, 2013 as shown by the minutes," Bertone was quoted as saying.

The ANSA news agency also quoted Bertone as saying that there was "no problem linked to this operation".

"I don't understand these attacks," he said, adding: "I am in harmony with the pope. I feel relaxed".

The Vatican's Financial Information Authority on Monday said 202 suspicious transactions had been reported in 2013 due to increased controls at the Vatican bank – the Institute for Religious Works – compared to six in 2012.

Contacted by AFP, the Vatican press office and Lux Vide declined to comment. The press service for the bank, the Institute for Religious Works, could not be reached.

Bertone was criticised last month over reports that he was moving into a 600-square-metreVatican apartment in apparent contradiction with Pope Francis's call for a "poor Church for the poor".

The cardinal defended himself by saying that he was paying for the renovation work on the apartment out of his own pocket and that the size of the apartment had been exaggerated and was in fact around 300 square metres.