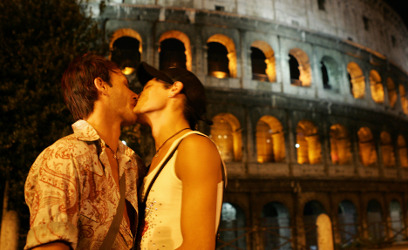 The Expo Tourism Gay trade fair is taking place in front of the Colosseum from 23-25 May. Photo: AFP

Although Expo Tourism Gay is now in its fourth year, this is the first time it is taking place in Rome.

The event will run from Friday to Sunday in front of the Colosseum.

The trade fair is aimed at “underlining the importance of lesbian, gay, bisexual and transgender tourism as a resource in a place of such international visibility," Paolo Bertagni, the event’s president, was quoted by ANSA as saying.

“We wanted to create an event that was the first celebration of diversity, and we have chosen to do so in a setting that is unparalleled,” Bertagni added.

According to the France-based Gay European Tourism Association, “gays are the world’s highest-spending tourists”.

The association estimates that the total annual expenditure on tourism by openly gay Europeans is between €48 and €52 billion.

“It is important for interested businesses and investors to understand the size and value of the gay tourism market in Europe,” the association said in a study.

There are 418 gay-friendly hotels across Italy, according to the website gaywelcome.com.

Still, Italy's acceptance of homosexuality lags behind most of Europe.