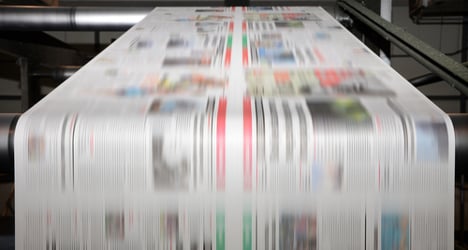 According to unions the government has failed to protect industry workers. Printing press photo: Shutterstock

Ink ran dry at Italy’s printing presses on Thursday, as labour unions united to force newspapers to temporarily run out of print.

As a result none of Italy’s daily newspapers, such as La Repubblica and La Stampa, will be published on Friday, Italian media reported.

According to unions the government has failed to protect industry workers who were left without a pension following reforms in 2012, the newspaper said.

In a statement labour unions Slc-Cgil, Fistel-Cisl and Uilcom-Uil accuse Labour Minister Giuliano Poletti of prompting the strike after failing to meet them to discuss the matter.

The revamp of the pension system was rolled out by former Prime Minister Mario Monti, whose technocratic government was brought in to push through urgent economic reforms.

As part of the shake-up the retirement age was upped and pensions were cut, a move deemed necessary to save the economy but criticized by many as unfairly targeting older Italians.