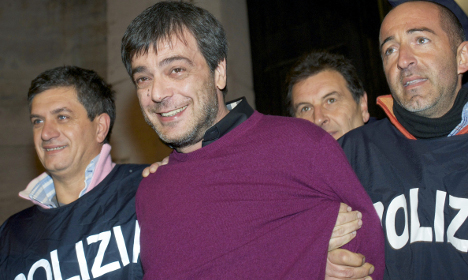 Antonio Iovine spent 14 years on the run before his arrest in November 2010. Photo: Roberto Salomone/AFP

Iovine has begun talking to investigators about his leading role in the Camorra mafia’s Casalesi clan, from the Caserta area of southern Italy, La Repubblica reported on Thursday.

The mafia boss was one of the clan’s leading figureheads and spent 14 years on the run before his arrest in November 2010.

The 49-year-old had been sentenced in absentia to 20 years and six months in prison for his role in the Casalesi clan, presiding over the mafia’s business interests in areas such as cocaine trafficking.

Authorities first saw signs that he may turn state witness in August 2011, but it was not until this month that Iovine first began talking, La Repubblica said.

In early May, he began to recount his lengthy past in the criminal underworld, at which point he was transferred from tough conditions in the Sardinia’s Nuoro prison and put under protection.

Since Iovine turned state witness his 45-year-old wife, Enrichetta Avallone, and his 25-year-old son, Oreste Iovine, have also joined a protection programme for their safety.

Iovine’s Casalesi clan is involved in a litany of crimes, including cocaine trafficking, money laundering through the construction industry and infiltrating public funds, according to a 2013 report by the EU’s law enforcement agency Europol.

As one of the leaders of the Casalesi, Iovine’s will therefore be able to testify over deals done with Italian politicians, public administration workers, business owners and others who have colluded with the Camorra mafia.

“The collaboration of the camorra boss Antonio Iovine with police will make the Italian political and business world tremble,” Roberto Saviano, a journalist and author of the book Gomorrah, which detailed the mafia’s workings and earned him death threats, wrote in a comment piece for La Repubblica.

Saviano said Iovine’s decision to turn state witness was unprecedented in the Camorra mafia and “could change everything”.

“The news risks changing the acquaintances between business people and organized crime forever; not only in Campania [region], not only in Italy.

“He knows everything,” Saviano said.