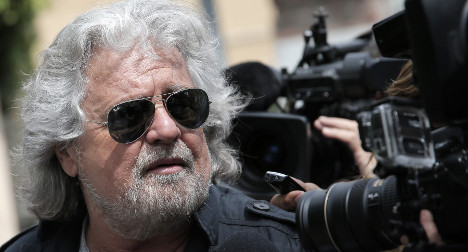 Beppe Grillo has been told he needs to tone down his aggressive behaviour after coming second in the EU elections: Photo: Marco Bertorello/AFP

Gianroberto Casaleggio, the founder of the Milan-based Casaleggio and Associates and a driving force behind the party's successes, told the former comedian that he needs to “tone down” his aggression during a post-mortem of the party’s election performance on Monday.

“You have to force yourself to smile; we must smile more,” the advisor was quoted in Corriere della Sera as saying.

M5S, whose anti-establishment premise tapped into a disenchanted electorate during Italy’s 2013 general elections, helping it to gain 25 percent of the vote, trailed behind the centre-left Democratic Party in the EU elections on Sunday with 21.2 percent.

Grillo is known for his populist tirades and insults against his rivals, comparing Italy's Prime Minister Matteo Renzi to Benito Mussolini in an outburst earlier this year.

Caseleggio reportedly said that the problem was not the content of the leader’s message, but the tone with which it’s delivered.

“There’s too much anger, too much aggression, which produces an undesired reaction,” he said.

Grillo reportedly responded: “This is me. I can’t speak in a different way.”

Grillo on Monday sought to reassure his supporters with a video in which he told them that "time is on our side".

In the video, he also took an indigestion tablet – the same one that he had vowed his rivals would have to swallow in one of his outbursts during the election campaign.

Analysts said that Grillo's party had lost support but had also cemented its opposition credentials and would bring a batch of 17 MEPs to Brussels for the first time.

Still, on home turf, the party is said to have alienated many Italians who voted for it in the February 2013 general election by failing to work together with other parties to pass the kinds of reforms that they advocate.

READ MORE HERE: 'Ours is a peaceful, cultural revolution'