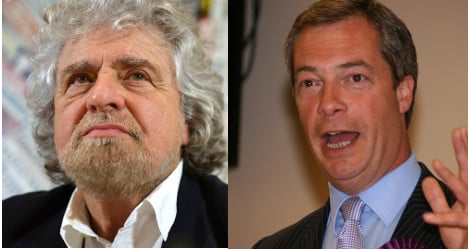 In an interview with the UK’s Daily Telegraph, Grillo said that, on the contrary, Farage, who persistently tries to deflect claims of racism against his party, has “a sense of humour and a sense of irony”.

The pair had lunch in Brussels on Wednesday to discuss a possible alliance following the outcome of the European elections, which saw UKip take the majority of the vote in Britain and the Five Star Movement come second in Italy.

“If this works out it would be magnificent to see a swelling in the ranks of the Peoples’ Army,” he added.

But Grillo, who told Farage “we are rebels with a cause, and we shall whistle as we march”, was lambasted over the meeting by politicians within his ranks.

“It’s a xenophobic party, our isn’t,” Giuseppe Brescia MP was quoted on the website Giornalettisimo as saying.

MP Giulia Sarti told La Stampa that the party was in the dark about the meeting, adding “Farage’s party disgusts me.”

But Grillo, a former comedian, told The Telegraph he had much in common with Farage when it comes to immigration.

"He is not the way he is described, just as I am not the fascist and Nazi the Italian papers describe me as," he was quoted as saying.

“He wants to control flows of immigration in Europe like us. It is not true he is a racist.”

Indeed, Farage has tried to distance his party from extreme-right views, suspending a newly elected councillor earlier this week following claims he made racist and homophobic comments on a social media website.

Grillo also pointed out that Farage did not want to ally with Italy’s Northern League, which took six percent of the vote in Italy on Sunday.

The pair are yet to make a deal, although they are expected to meet again in the coming weeks.