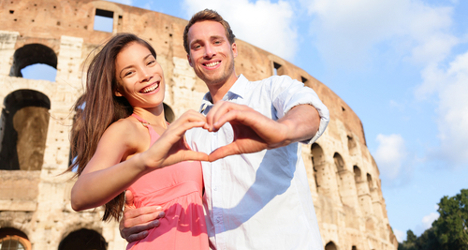 Possible sites to host nuptials include the Olympic stadium and the Colosseum. Colosseum photo: Shutterstock

The city council backed the motion earlier this week, which would allow couples to tie the knot in some of Rome’s most famous locations.

Possible sites to host nuptials include the Olympic stadium and the Colosseum, described by Il Messaggero newspaper as “a true dream for who knows how many couples”.

SEE ALSO: Top 10: Best places to get married in Italy

But the move will likely face opposition as it goes before the government, with Culture Minister Dario Franceschini describing it as “a very odd idea”, Rai News reported.

Mariarosaria Barbera, superintendent for Rome’s cultural heritage, also stood up against the city’s romantics. “I think that, in an elegant way, Minister Franceschini has understood with clarity the ministry’s position,” she was quoted by Rai News as saying.

While thoughts of love occupied rulers of the Italian capital, lawmakers across town have this week been busy speeding up the divorce process.

MPs yesterday approved a motion to allow couples to divorce within six months, a plan presented earlier this month by the government’s Justice Commission. The law now passes to the Italian Senate, where it will be debated before it can be put into effect.