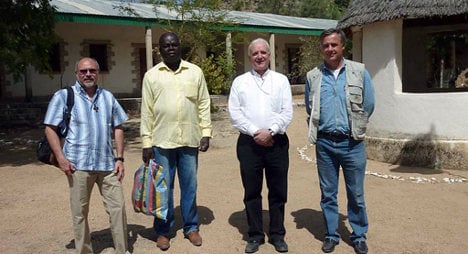 Giampaolo Marta and Gianantonio Alllegri with Vicenza's Bishop Beniamino Pizziol (SR) and a resident near Maroua, northern Cameroon in January. Photo: Diocesi Vicenza/AFP
Fathers Gianantonio Allegri and Giampaolo Marta, from Italy's northern Vicenza region, were released alongside Sister Gilberte Bussiere on Saturday, Italy's Foreign Ministry said in a statement,
Sister Bussiere, 74, will return to Canada for a "battery of tests",  her congregation said on Monday.

They were kidnapped near Cameroon's border with insurgency-wracked Nigeria on April 5th and were released as part of a prisoner exchange with a fee being paid, said a Cameroonian military source.

Nigeria's Boko Haram Islamists were blamed for the attack.

Italy's Foreign Minister Federica Mogherini said: "It 'a great joy. First of all, I thank the authorities of Cameroon and President Paul Biya for their great work done, and the Canadian government, with whom we have worked closely."

Father Marta had been in Cameroon for more than six years, while Father Allegri had arrived last September.

Josephine Badali of the Notre-Dame parish in Canada's Quebec province told a press conference Bussiere would return home "as soon as possible."

Bussiere joined the congregation in 1957. She has lived as a missionary in Cameroon since 1979.

"She is doing very well. She feels much better," Badali said, adding that for Bussiere, the kidnapping was "a devastating" but also a "deep spiritual experience."

"Her heart is in Cameroon," she said, but whether the congregation continues to support its mission in Cameroon will require some "serious reflexion." Bussiere had noted in an email sent six hours before her kidnapping that north Cameroon was becoming "more dangerous."

Back in Canada, Bussiere is scheduled to undergo a medical exam after recently undergoing treatment for cancer. She will also visit with her 97-year-old mother in Sorel-Tracy, 80 kilometers from Montreal.