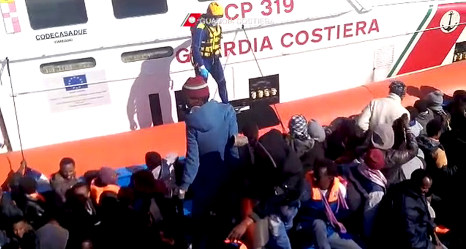 Seven alleged people smugglers have been arrested after thousands of migrants were intercepted at the weekend. GuardiaCostiera/AFP

The men, five Tunisians, a Syrian, and a Moroccan, were arrested in three different operations accused of transporting migrants to Augusta, Pozzallo and Port Empedocle in Sicily.

The Italian navy said Saturday it had picked up nearly 3,000 migrants in just 24 hours, as part of a major ongoing operation to save the lives of thousands of immigrants heading for Europe in overcrowded and rickety boats.

Some 1,443 were picked up on Friday, with one boat carrying 264 children, while another 200 people were plucked from boats near Lampedusa, the tiny Italian island which was the scene of a boat tragedy last year.

Some 1,300 migrants were picked up on Saturday.

One of the men arrested on Monday, a 34-year-old Tunisian, told investigators he was approached by a man in a bar in Libya, who suggested he leave for Italy.

"At the start, he said that I would have to pay 1,000 Libyan dinars (€600), then, after learning I would be going by fishing boat, he offered me a discount," the man told the Ansa news agency.

"In the end, he said he would pay me $1,500 (€1,100) once the crossing was complete, on the condition that I stopped the boat in international waters," he said.

According to witnesses, each of the migrants paid an average of $1,500 for their passage, with the purchase of the life jacket an "optional" $200 extra.

Italy has long borne the brunt of migrants making the perilous crossing from North Africa to Europe, but EU border agency Frontex says there has been a significant rise in numbers in recent months.

The Italian government last week put the number of migrant arrivals at over 39,000 so far this year – not far off the 43,000 registered in the whole of 2013.

There are often fatalities en route, and in Lampedusa last October, more than 400 migrants died trying to make the crossing.