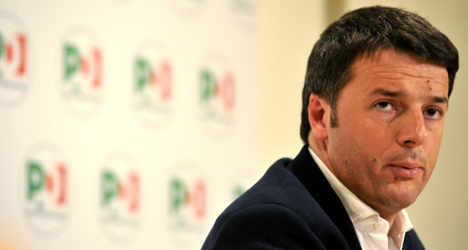 Renzi was “furious” to learn of the scandal during a meeting on Wednesday with Raffaele Cantone, the head of Italy’s Anti-Corruption Authority (ANAC), who was hired to dig up corruption surrounding another public project: Milan Expo 2015.

“It’s a curse! Behind every great work there is corruption,” Renzi was quoted as saying in Corriere della Sera.

“I work like a crazy man to convince investors to come to Italy, but the past seems to want to come back.”

Renzi said the scandals “give a bad impression of Italy” and are counterproductive, especially at a time of fragile economic growth.

Venice mayor Giorgio Orsoni was among 35 people arrested as part of an investigation into bribery, extortion and money laundering relating to Moses, a multi-billion-euro flood-barrier project in Venice.

Orsoni, who belongs to Renzi’s ruling Democratic Party, was placed under house arrest on Wednesday morning, while prosecutors are also calling for the arrest of Giancarlo Galan, Veneto’s ex-president and a current senator as well as European Parliament member Lia Sartori – both from former prime minister Silvio Berlusconi's Forza Italia (Go Italy) party.

Galan led Venice between 1995 and 2010 and was also agriculture minister in Silvio Berlusconi's government. The €5.4 billion Moses project was launched by Galan and Berlusconi in 2003.

He has called for a redraft of the anti-corruption law to include the crime of money-laundering, carrying with it a prison term of between three and eight years, as well accounting fraud, which was decriminalized in 2002 by Berlusconi’s government.

The bill is currently under debate at the Senate.

“Either way, anti-corruption procedures will be strengthened,” Renzi said.