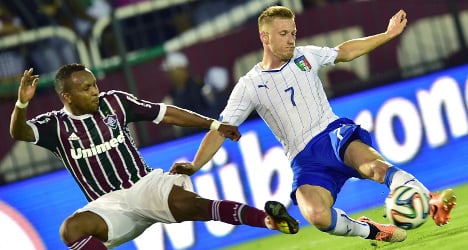 Speaking ahead of the tournament opening this Thursday, Abate also said the national side is weaker than those of Germany and other countries, but it can still prove itself in the tournament,

“There are squads like Brazil, Argentia, Spain and Germany that are stronger; Italy is a step below but we can still put anyone into difficulty…it’s up to us to prove it,” Abate was quoted on Goal.com as saying.

Italy won 5-3 against Brazilian team Fluminense in a friendly on Sunday, thanks to a hat-trick from striker Ciro Immobile and two goals from Lorenzo Insigne.

Once the tournament gets underway the side will face England on Saturday, a game Abate predicted will be a “challenge” for Italy.

“England is a squad that has changed a lot, I think it could be the revelation of the tournament.

“When we face them we must give our maximum and go out onto the field well-aware of their quality,” he said.

According to the global ranking by FIFA, the international football association, Italy is currently in ninth place and one spot above England. Spain clinched the number one spot, ahead of Germany and World Cup hosts Brazil.