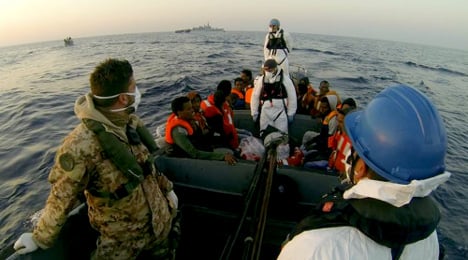 Italy says that more than 50,000 migrants have landed on its shores since the start of this year. Migrants boat rescue Photo: HO/Italian Navy/AFP

The migrants were taken to three Italian ports, with the largest contingent of 1,300 arriving at the southern Italian city of Taranto onboard a navy ship Etna, according to media reports.

The refugees, including hundreds of women and dozens of babies, were rescued on Sunday as part of the Italian navy's "Mare Nostrum" operation, launched last year by Rome after two boats sank in October leaving more than 400 dead.

The majority of the migrants rescued at the weekend were Syrian and Sudanese. They were likely to be taken to refugee centres across Italy.

A second contingent of 529 migrants were taken to the Sicilian capital, Palermo.

This group, transported to port on the Panamanian cargo ship City of Sidon, included 120 women, a dozen of them pregnant, and 19 children.

Thousands of refugees have been taken to Sicily in recent days where they are processed, though officials on the island said on the weekend they were no longer able to cope with the influx of people.

'The migrant situation is becoming untenable'

A third group of 211 asylum-seekers were taken to another Sicilian port, Pozzallo, but are likely to be transferred to another location as reception centres there already hold more than 400 people.

The operation to rescue the migrants involved the Italian, Maltese and US navies.

Favourable weather conditions mean that thousand of migrants from Syria, Eritrea and other sub-Saharan countries have arrived or are expected to arrive on the Italian coast in the coming days.

Italy says that more than 50,000 migrants have landed on its shores since the start of this year – around the same number as for the whole of last year. Neighbouring Malta says 2,200 have arrived on its islands.