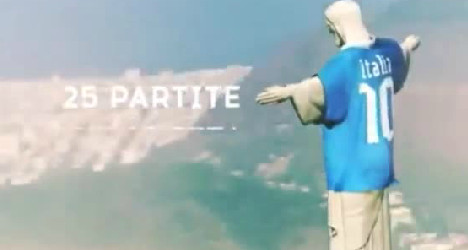 The Archdiocese of Rio de Janeiro said the advert, which featured a digitalized Italian shirt on the statue, was “blasphemous” and that “exploiting the image of Christ the Redeemer is a crime”, according to a report in Corriere, which cited Brazil’s O Globo newspaper.

The advert below is part of Rai's campaign trailer for the World Cup football tournament, which sees Italy take on England in the first game of the group stage on Saturday.

It features children, clad in the Italy kit, playing football in the street before ending with the image of the statue wearing the blue shirt with ‘Italia’ written on the back, alongside the slogan ‘Brazil awaits us’.

The Archdiocese, which owns the image rights for the statue, compared the “disrespectful” gimmick to “Brazilian TV making an advert in which mulatto girls engaged in indecent behaviour with the gladiators of the Colosseum.”

“"The archdiocese feels outraged,” Alessandro Maria Tirelli, an Italian lawyer who notified Rai of the potential lawsuit, was quoted in Il Fatto Quotidiano as saying.

The advert, which has since been withdrawn by Rai, also sparked outrage in Italy, with Edio Costantini, the president of president of the Italian sporting Center (CSI), a sport organization of the Vatican, telling Il Fatto “we live in a world that has put God on the bench”.

“At a time when religious values seem to have become insignificant and everything is commercial, it’s right to feel indignation, even with an act of force,” he was quoted as saying.

A spokesperson for Rai told Il Fatto: “We will examine the matter, but for now decline to comment.”