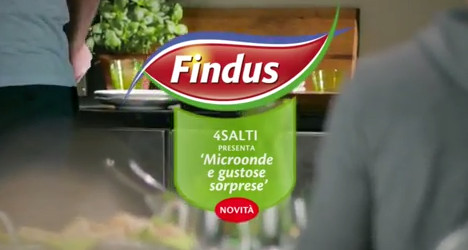 The Findus advert features a gay man "coming out" to his mother. Photo: Screengrab/YouTube

Ten months after the chairman of the Italian pasta giant, Barilla, said during an interview that the company would never feature gay people in its adverts, Findus Italia has produced a commercial in which a man is seen “coming out” to his mother over a meal.

The advert below features Luca, who hosts a dinner party for his mum at the home he shares with a his flatmate, Gianni.

After surprising her with his culinary skills, he reveals: “Mum, there is another little surprise: Gianni isn’t only my flatmate, he’s my partner”.

His mother replies: “My darling, I already got that”, and then touches his hand.

“It should set an example for how Italian companies should communicate,” Fabrizio Marrazzo, the association’s spokesman, was quoted in Il Messaggero as saying.

“The advert clearly demonstrates the simplicity of a gay couple’s daily life, and acceptance of them in an intelligent way. We applaud Findus and call on all companies, big and small, to do the same. We’re still waiting for Barilla to give us a sign in that respect.”

The comments by Guido Barilla last September sparked global uproar, with calls for the pasta brand to be boycotted.

The company later apologized and hastily put together a team comprising gay paralympics gold medallist Alex Zanardi to teach it how to improve its corporate culture.

The gaffe also gave rise to debate over homosexuality in the Italian workplace.

READ MORE HERE: 'Most Italian firms' are homophobic like Barilla