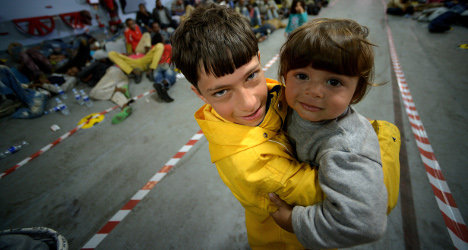 Children rescued by the navy off the Italian coast in 2013. More than 50,000 people have arrived in Italy by boat so far this year. Photo: Filippo Monteforte/AFP

The criticism came as Italy struggles to deal with waves of immigrants washing up on its southern coasts in overcrowded boats, with more than 50,000 people landing so far this year – a similar number to those who arrived in all of 2013.

The UN High Commissioner for Refugees slammed the "unacceptable" treatment of the refugees from Syria, Somalia and Sub-Saharan Africa, who landed in Sicily on Monday and were shipped to Rome and Milan in coaches overnight.

"There were two groups of between 160 to 170 people each. One of the groups was abandoned near Rome, the other near Milan," Carlotta Sami, the UNHCR's spokeswoman in Italy, told AFP.

Those left near Rome were eventually taken in by a centre for asylum seekers in the capital on Tuesday, but those in Milan were still in the parking lot in the middle of the afternoon, she said.

The refugees "were found without shoes, disorientated, and without having been given anything to eat or drink," the agency said.

They were part of a contingent of 1,300 immigrants – including hundreds of women and dozens of babies – who had been picked up and taken to the southern Italian city of Taranto on Monday.

Hundreds of others rescued at the same time were taken to Sicily, where officials said they were no longer able to cope with the influx of people.

In the latest tragedy to hit boat refugees, Italy's coastguard said on Tuesday that three migrants drowned and six more were missing in the Mediterranean.

Favourable weather conditions mean that thousand of migrants are expected to attempt the perilous crossing from north Africa to the Italian coast in the coming days.