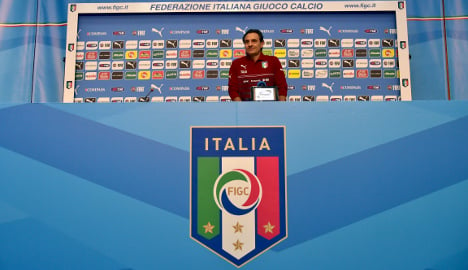 Group D is the only one at the World Cup to contain three former world champions in England, Italy and Uruguay. Costa Rica complete the line-up.

The tone will be set by the opening game between Steven Gerrard's England and Gianluigi Buffon's Italy in the heat and humidity of Manaus on Saturday.

Given the presence in the group of reigning South American champions Uruguay, spearheaded by the prolific Luis Suarez, defeat for either side could prove fatal.

England and Italy last met at the quarter-finals of the 2012 European Championship, when Cesare Prandelli's side won on penalties after bossing proceedings in a 0-0 draw.

Goalkeeper Gianluigi Buffon and midfield metronome Andrea Pirlo remain from the Italy team that tasted glory at the 2006 World Cup in Germany, but there is uncertainty over the team's attacking configuration.

Playmaker Riccardo Montolivo has been ruled out with a broken leg, while the absence of Giuseppe Rossi due to fitness concerns means that Mario Balotelli may have to shoulder much of the goal-scoring burden.

"We know we're in a particularly tough group," says Prandelli, whose side habitually line up in a 4-3-1-2 formation but can operate with a three-man defence.

"Our first objective is to qualify, and then we'll see."

Like Italy, England finished unbeaten in European qualifying, but optimism was tempered by back-to-back friendly defeats at home to Chile and Germany last November.

England manager Roy Hodgson has selected only six players with previous World Cup experience and his squad has a youthful edge.

Winger Raheem Sterling, 19, could start against Italy after a breakthrough season with Liverpool, while 20-year-old Everton midfielder Ross Barkley will also hope to make an impact.

Given the conditions and the expectation that Italy will dominate possession in Manaus, Hodgson must decide whether to keep faith with a tried-and-tested 4-2-3-1 system or pack central midfield with a 4-3-3.

"There are a lot of very mobile, athletic, pacy players in the team," says Hodgson.

"I don't want to be quoted as saying, 'We're going to play a high pressing game,' because that automatically assumes every time their goalkeeper rolls the ball out to someone level with him, 100 yards from our goal, that we're going to fly our back-line up to the halfway line."

Uruguay's chances of success may rest on the fitness of star striker Suarez, who will lead the line alongside Paris Saint-Germain's Edinson Cavani if he recovers from knee surgery in time.

Suarez has had a sensational season with Liverpool in which he scored 31 goals in the Premier League.

Oscar Tabarez's settled side were surprise semi-finalists at the 2010 World Cup, losing to the Netherlands, but they laboured in qualifying and had to come through a play-off against Jordan.

"Our style has always remained the same since 2006, when we started working together," says centre-back Diego Godin. "Our goal is to advance to the second round – every team aims for the same."

Costa Rica qualified in second place behind the United States in the CONCACAF region, but they will have their work cut out to repeat their shock last-16 showing from their maiden World Cup in 1990.

Colombian coach Jorge Luis Pinto, who favours a five-man defence, has a reputation for producing tactically well organised teams and is also blessed with some gifted forward players.