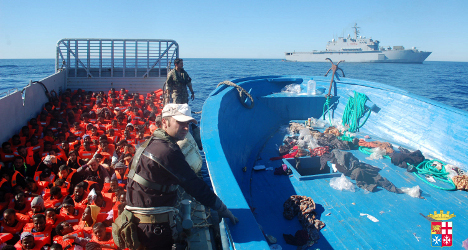 A rescue operation in February 2014. So far this year 50,000 boat migrants have arrived in Italy. Photo: AFP Photo/Italian Navy

The use of social media to promote the high-risk journeys, which last year claimed the lives of hundreds of people, came to light after Sicilian police arrested one of the traffickers.

The man arrived along with around 311 boat migrants in Pozzallo, on the Sicilian coast, last Wednesday.

In a police confession, the Egyptian reportedly told investigators that he and a group of Syrians had created a Facebook group for the journey offered to Italy. The trafficking gang raked in $500,000 (€369,000), La Repubblica said.

Earlier this month seven alleged people smugglers were arrested in Italy who, according to witness testimony, charged around $1,500 per person for the journey. A life jacket was offered for an optional $200 extra, migrants said.

The traffickers have been described as “death merchants” by Interior Minister Angelino Alfano, who has appealed to the EU to help Italy deal with the number of boat migrants.