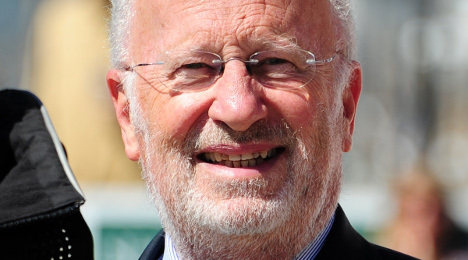 Giorgio Orsoni stepped down a day after being released from house arrest after accepting a four-month prison sentence in a plea agreement. Photo: Olivier Morin/AFP

The left-wing mayor stepped down a day after being released from house arrest after accepting a four-month prison sentence in a plea agreement, for benefiting from illegal party financing during his 2010 city election campaign.

Orsoni had been arrested along with nine other politicians and business leaders in a fraud investigation involving around 100 people, including a retired top police general.

Prosecutors accused Orsoni of benefiting from financing linked to the embezzlement of public funds for the project, which began in 2003 but has been badly delayed and is now set to be completed in 2016.

Police said they had traced some 20 million euros ($27 million) in kickbacks from contractors for the "Mose" (Moses) project that were transferred into foreign bank accounts allegedly used for political party financing.

Orsoni admitted to accepting some of the funds, but said it was his Democratic Party (PD) which had advised him to do so, as other mayors had done before him.

However, he was largely abandoned by the leading rungs of the party and on Friday blamed them for his decision to quit after some four years in office.

"What really makes me bitter is the PD's unacceptable behaviour, the superficial way they have treated this affair," he was quoted as saying by Italian media.

Debora Serracchiani, deputy leader of the PD, and regional secretary Roger Menech released a joint statement saying they were "sorry from a human point of vue for Giorgio Orsoni… but have come to the conviction that the conditions for him to continue as mayor of Venice no longer exist."

"I have made many enemies and maybe this is the price I'm paying," he said on his release from house arrest.

"I couldn't know that an illegal system was used" for the 2010 campaign, he said.

The Venice scandal is the latest surrounding a major public works project in Italy, following similar investigations into building for Milan Expo 2015, post-quake reconstruction in L'Aquila and preparations for the G8 summit in 2009.