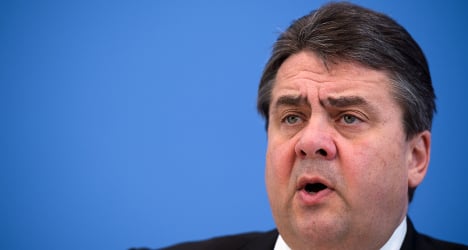 Germany's deputy chancellor Sigmar Gabriel hinted that Italy and France could be given more time to get their finances in order. Photo: Bernd Von Jutrczenka

In comments which could restart a debate over austerity and growth in Europe, Gabriel struck a conciliatory tone to countries struggling to meet the EU's strict fiscal rules.

"I'm in favour of more honesty in the debate," the economy minister and deputy chancellor told the mass-circulation daily Bild.

"We Germans are in better shape than other countries because we pushed through a tough reform programme. But we, too, needed time to cut our state debt," Gabriel said.

On a visit to France on Monday, the minister had joined his counterpart Arnaud Montebourg in calling for more time for countries that have pledged to implement the necessary reforms to get their economies and finances in order.

However the conservatives in Germany's left-right coalition government are opposed to any easing of the deficit rules.

On Tuesday, the French national accounting court said that France was set to miss its extended target for reducing its public deficit this year.