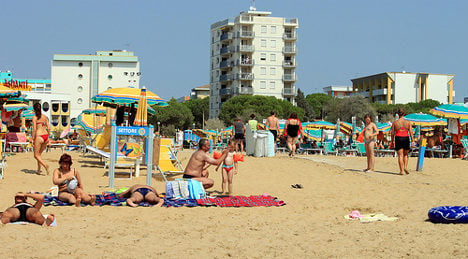 Smoking is banned on the stretch of beach between the shoreline and first row of sun-loungers in Bibione. Photo: Simon/Flickr

Local authorities in Bibione, in the Venice province, have enforced the ban – the first of its kind in Italy – in an effort to protect beachgoers from the effects of passive smoking as well as the environment, Corriere della Sera reported on Wednesday.

The move covers the stretch of beach between the shoreline, where children tend to congregate, and the first row of sun-loungers, across 9km of coast.

However, people will still be able to smoke under their own umbrellas and away from the no-smoking zone.

Pasqualino Codognotto, Bibione’s mayor, stressed the that move is not intended to be “punitive” but to "raise awareness".

“We want Bibione to be a beach of well-being, a place that’s friendly to health and the environment,” he was quoted in Corriere as saying.

The initiative, which has won the support of the World Health Organization and Italy’s Ministry of Health, was put into practice after several trial-runs and a survey of 1,500 people, in which 92 percent backed freeing some areas of the beach from smoking.

Placards with the slogan, “Respire il mare”, or “Breathe the sea air”, have been placed on the beach.

Cigarette butts reportedly make up 27 percent of the waste cleared from the beach.

Meanwhile, another beach in Italy has instead taken a friendly approach towards pets. In May, a beach specifically for dogs and their owners opened in Rimini.