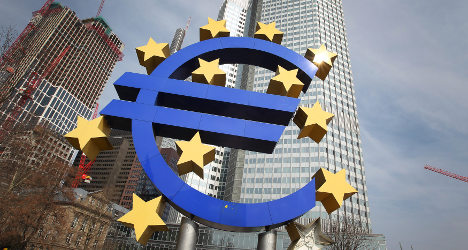 "Rules are rules," said French Finance Minister Michel Sapin in reference to the Stability Pact, a strict set of fiscal rules requiring member states to keep their deficits in check.

"We are not asking for a change in the rules," he said as he arrived for a regular meeting of eurozone finance ministers.

Earlier in the week the German economy minister and vice chancellor, Sigmar Gabriel, suggested that economically-embattled countries such as Italy and France could be given more time to get their finances in order.

The comments were met with a warm reception in Paris and Rome, with officials welcoming Gabriel's conciliatory tone towards countries struggling to meet the conditions of the EU's Stability Pact.

Under the rules, public deficits – the shortfall between government income and spending – should not exceed 3.0 percent of annual gross domestic product.

Accumulated debt – the sum of all those annual deficits – is supposed to be kept at 60 percent of GDP.

One idea being floated for loosening the budget rules was to exclude government investment spending when measuring the deficit.

"This is not what we have asked," said Italian Finance Minister Pier Carlo Padoan. Only "existing instruments" will be proposed "to stimulate growth" when Italy takes over the EU presidency next month, he said.

Merkel on Wednesday dismissed any need for modifications to the EU's Stability Pact, which could reignite a heated debate over austerity and growth in Europe.

"The Stability Pact as it now stands already contains all the flexibility we need to overcome the problems," Merkel said.

The EU's Economics Affairs Commissioner Olli Rehn reiterated the argument as he arrived at the Eurogroup meeting, his last before joining the European Parliament as a lawmaker next month.

The rules only apply over the medium-term, he said, and avoid unreasonable short-term pressure on struggling member states.