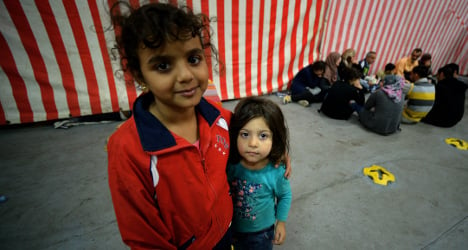 Two girls after being rescued off the coast of Italy in October 2013. Photo: Filippo Monteforte/AFP

Of the over 58,000 people who have made the perilous journey from the coast of North Africa across the Mediterranean, 3,160 were unaccompanied minors, the organization said in a report titled "From Syria to Europe, fleeing the war."

The majority of the accompanied minors – many of whom were under five years old – were Syrian, and most were landing in Italy after long and dangerous journeys though Libya, where they are exposed to "persecution, theft, threats and violence."

Most Syrian families arriving "are middle class professionals, businessmen, shopkeepers, farmers" who "fled Syria one or two years ago on a costly journey, often passing through Lebanon and Egypt," where many spend months "in precarious conditions".

"In Libya we were molested, they told us to leave…we decided to go, to die at sea was better than the hell we were living there," 15-year-old Nadia from Homs was cited as saying.

At the start of June, the organization said around a third of minors registered on arrival in Italy were then dropping off the radar, and Italian charities have warned that they may be at risk of falling into the clutches of organised crime groups or organ traffickers.

Photo: A child is helped aboard an Italian Navy vessel.

Italy's commissioner for missing persons, Vittorio Piscitelli, in April said the missing minors "could end up in the hands of human traffickers, or groups of paedophiles. And we cannot disregard the abominable practice of organ trafficking."

Raffaele Milano, programme director for Save the Children in Italy, said "a solution must be found as soon as possible to avoid other unaccompanied minors leaving the reception centres, becoming 'invisible' and exposing themselves to the risk of exploitation or violence".

The Save the Children report, published on the eve of World Refugee Day, also included data on women, 5,300 of whom made the crossing since the start of the year to June 17th.

Favourable weather conditions mean that thousands of other migrants are expected to attempt the crossing in the coming weeks.

Watch a video of a rescue operation in the Mediterranean, featuring an interview with a Syrian child: