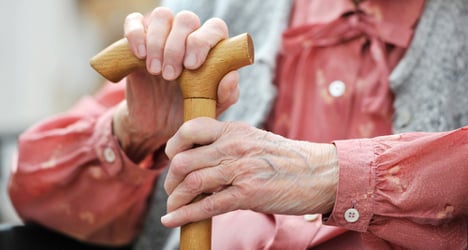 Investigators wiretapped suspects and installed hidden cameras in the care home, to capture evidence of the abuse. Elderly photo: Shutterstock

The arrests were made after police uncovered the abuse at the care home in Vaprio D'Adda, in Milan province, Italy's financial police said in a statement.

They are accused of slapping, insulting and humiliating elderly residents and other patients in their care.

Those who asked for help most frequently were particularly targeted, with “daily insults and hits inflicted against one ill elderly woman affected by senile dementia.”

Other residents were left in bed for days on end, without sheets being changed and “under continuous insults and hits”. Patients were also given expired medicine.

According to La Stampa newspaper, the two care home workers “punished” patients by depriving them of food and shutting them in the bathroom.

A further 15 people are being investigated over the abuse, in addition to a doctor who worked at the care home, the police said.

Staff at the care home were said to have worked “in the black”, being paid off the books, without the necessary qualifi-cations.

Thursday’s arrests came more than 18 months after the investigation go underway in November 2012.

Investigators wiretapped suspects and installed hidden cameras in the care home, to capture evidence of the abuse.

Watch a video of the police investigation below. Warning: contains disturbing footage.