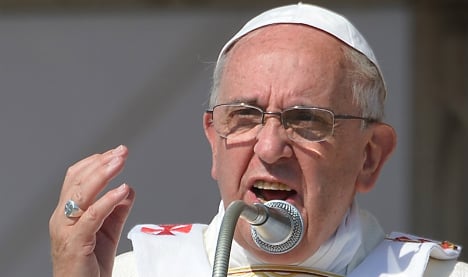 The mafia "is the adoration of evil and contempt for common good. This evil must be beaten, expelled," he told worshippers near the hometown of a toddler killed in a clan war earlier this year.

"Those who in their lives follow this path of evil, as mafiosi do, are not in communion with God. They are excommunicated," he told the congregation.

People who are excommunicated are expelled from the Church, unless they repent, and are considered to be condemned to Hell in the afterlife.

The 77-year-old pontiff was speaking at the end of a trip to the territory controlled by the powerful 'Ndrangheta mafia, where he comforted relatives of "Coco" Campolongo, a three-year-old who was shot dead in January in an apparent mob hit over money.

"It must never again happen that a child suffers in this way," the pope said as he met Coco's father and grandmothers, according to a Vatican spokesman.

Francis visited the Calabria region despite fears that he might provoke the local underworld.

"I pray for him continuously. Do not despair," Francis said during a visit to Castrovillari prison, where several members of Coco's family are serving time for drug-related crimes.

He asked them to pass the message on to the toddler's mother, who was also in prison at the time of his murder and is now living under house arrest.

Coco was shot in the head in January, executed along with his grandfather and his Moroccan companion after a drug debt went unpaid.

The discovery of his body strapped to a car-seat in a burnt-out Fiat Punto sent shockwaves through Italy, as did the murder just two months later of another three-year-old in the nearby Puglia region.

The pope's trip to what is the second-poorest region in the south of Italy aims not only to remember child victims but also highlight the problems the young have in escaping the pervasive grip of the wealthy 'Ndrangheta.

Unemployment among the under-25s in the region stands at 56.1 percent — the highest in Italy in 2013 according to Eurostat — and local mobsters thrive by offering idle youngsters work, luring them into their networks.

According to Save the Children Italy, more than a third of all families in the impoverished south live in communities known to be under the control of clans. Many of the inmates the pope met at Castrovillari were serving time for mafia-related crimes.

Under a blistering southern sun, Francis clasped the hands of some of the 200 prisoners, several of them weeping and throwing their arms around him.

Francis stopped to speak with a group of disabled people in a large crowd of faithful outside the jail, before heading by helicopter to Coco's hometown of Cassano allo Jonio, nestled at the bottom of a steep mountain.

There the pope, who was met with cheers and the release of dozens of yellow and white balloons — the Vatican colours  – visited a hospice before sharing a lunch of spaghetti and meatballs with poor people and young drug addicts.

"Strong is he who, once fallen, manages to rise up again," the pontiff told the addicts.

Francis then made a short stop to pray at the spot in the nearby town of Sibari where a priest was beaten to death in January with an iron bar in a failed extortion attempt.

At the mass attended by more than 250,000 people at the close of day he warned young people in the region that they "must say no" or risk being absorbed into the mafia world.

Francis's determination to rattle mafiosi has sparked warnings that he himself could become a target.

The 'Ndrangheta plays a leading role in the global cocaine trade and its Calabria bastion is a major transit point for drug shipments from Latin America to the rest of Europe.

It has benefitted in the past from historic ties to the Church, with dons claiming to be God-fearing Catholics and priests turning a blind eye to crimes.

But over the past 20 years numerous priests have taken part in the fight against the clans — sometimes paying for their bravery with their lives.