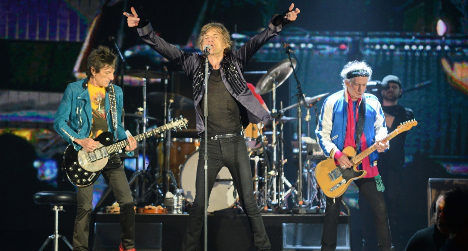 “People who went to hotels, restaurants, who took taxis or had ice creams determined a profit for the city of €25 million in a day.”

Performing at Circus Maximus, the ancient Roman chariot racing stadium, the ageing rockers delighted fans with classic hits including Jumpin’ Jack Flash, which opened the show, Streets of love and Let’s spend the night together.

Mick Jagger even treated the audience to a few sentences in Italian, winning him praise from the Italian media.

Much to the delight of the crowd the rocker even had a few predictions for Italy’s performance in the World Cup, as the squad prepares to face Uruguay on Tuesday.

“Italy will win the World Cup. I think you will beat Uruguay 2-1,” he said in Italian.

Their performance earned the band a glowing review from Rome daily Il Messaggero which wrote: “He [Mick Jagger] continues to jump, run, sing and spread charisma on a stage as big as a football field, demonstrating that he is one of the greatest performers in history.”

The positive reception comes despite concerns raised among heritage groups in March who warned of "unpredictable consequences" and possible "acts of vandalism" in a "very fragile" area of the city.

"The choice of the Circus Maximus for the Rolling Stones concert brings a measure of risk for the heritage of the area that is not only heightened but also hard to predict," the office of archaeological supervisors said in a statement at the time.

After Saturday's concert Jagger was spotted dining out in the city’s Trastevere district where he enjoyed a traditional meal of Carbonara pasta at the famous Antica Pesa restaurant, according to La Repubblica.

In May the Stones performed in Oslo where Jagger rolled out two sentences of surprisingly passable Norwegian.

The concert was the Stones' first since March, when the band put their tour on hold following the suicide of Jagger's girlfriend, the designer L' Wren Scott.