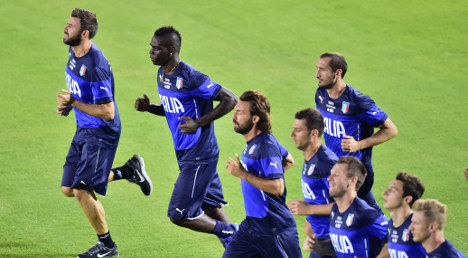 A win for the South Americans would send Cesare Prandelli's side crashing out at the first hurdle, four years after bowing out at the group stage as then world champions in South Africa.

The Azzurri require just a draw to go through, but after a lifeless display in a 1-0 defeat to Costa Rica, captain Gianluigi Buffon hinted that the hot and humid conditions have taken their toll.

"Once we've finished training today we'll see what kind of condition we are in," said Buffon.

"I think a lot of European teams are struggling compared to the Latin Americans.

"But that isn't an excuse. The climate is the same for all of our opponents."

If there is belief that Latin Americans sides are coping better than teams from Europe in such a testing climate, Group D is arguably a good indicator.

Costa Rica host England on Tuesday looking for their third consecutive group win having fought back from a goal down to stun Uruguay 3-1, before outplaying a visibly jaded Italy in Recife on Friday.

Juventus midfielder Claudio Marchisio said after the defeat: "In the second half we suffered, the heat made it difficult to remain lucid."

Uruguay bounced back from that shock reverse with a far improved performance to beat England 2-1 thanks to a Luis Suarez double.

"They've managed to relaunch their campaign by beating England and now the whole of Uruguay believes they can beat us and go through," added Buffon, who said Italy will have to be wary of Liverpool striker Suarez.

"We know plenty about (striker Edinson) Cavani thanks to his time at Napoli. But we know less about Suarez."

"Now, we have to send some positive signals and the only way to do that is to raise our game against Uruguay.

"We need to show some strength and pride and come up with a win. We need cool heads but also to be highly motivated.

"If we end up going out in the first round, it will be a failure."

With Costa Rica already through and England eliminated by the Italians' defeat in Recife, Italy and Uruguay – who both have three points – have been left to battle for the second qualifying spot.

Due to an inferior goal difference, Uruguay need a win if they are to have a chance of repeating their exploits of 2010 when current coach Oscar Tabarez steered the 1950 champions to their first semi-finals appearance in 40 years.

After their win against England, spirits are high in the 'Celeste' camp.

"I have a group who are used to resisting pressure and who react to it in a good way," said Tabarez.

"The pressure was worse against England, or do you think that we'd gone shopping?"

But Tabarez, who spent spells with AC Milan and Cagliari in the 1990s, acknowledges the challenge the Azzurri pose.

"They've been world champions four times and we have a lot of respect for them. It will be a tough challenge for us but I believe we'll have our chances," said the 67-year-old.

Italy have had barely three days to digest defeat to Costa Rica, recuperate spent forces and get in the right frame of mind.

It is only a year since last the two sides met in the Confederations Cup, drawing 2-2 in the match for third place before Italy won 3-2 in a penalty shoot-out.

"It's going to be an especially challenging match. We played them last year in the Confederations Cup and after we played well for 35 minutes, they took over," said Prandelli.