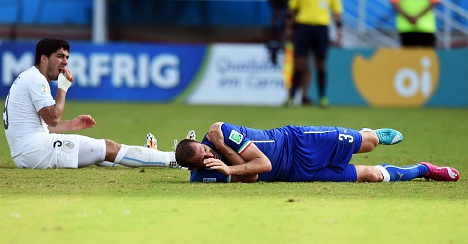 Uruguay beat Italy 1-0 in the tense match in which the Europeans ended with ten men and left the World Cup at the group phase for the second time in succession.

But amid the celebrations, immediate attention fell on a clash between Suarez and Italian defender Giorgio Chiellini who showed teeth marks in his shoulder after.

Television replays showed Suarez — who has twice been sanctioned for biting players — appearing to attempt to sink his teeth into Chiellini's shoulder in an off-the-ball incident.

Italy won the 2006 World Cup, then failed to reach the last 16 in South Africa four years ago. They required only a draw against Uruguay at Estadio das Dunas in Natal to go through this time.

However the Azzurri suffered a critical blow early in the second half when Claudio Marchisio was sent off for a studs-up challenge.

Shortly after the Suarez-Chiellini incident, Godin rose in a crowded box and the ball rebounded off his shoulder to beat Buffon in the 81st minute.

Uruguay's win means they leapfrog Italy to join Costa Rica in the last 16 of the tournament.

Italy coach Cesare Prandelli deployed a 3-5-2 designed to tighten the Azzurri defence and give them attacking options on the wings with Matteo Darmian and Mattia De Sciglio.

But despite a solid display in a scoreless first-half, the Azzurri's hunt for goals — led by Ciro Immobile and Mario Balotelli — reaped no reward.

Uruguay, starting with the same 4-4-2 line-up that defeated England 2-1, came closest early on when a free kick whipped in deep by Luiz Suarez forced Buffon into a desperate punch-out.

Celeste strikers Suarez and Edinson Cavani were described by Prandelli as one of the most potent strike duo's at the World Cup, but they were mostly kept on a tight rein during a nervous first half.

Italy suffered a blow when Balotelli was cautioned for a needless high tackle on Inter's Alvaro Pereira, who felt the AC Milan striker's boot come over the back of his head.

Balotelli's yellow card means he will miss Italy's next match, although that will now be after the World Cup.

On the half hour he dispossessed Cavani to launch Balotelli but the striker failed to release as Immobile ran through into an offside position.

Italy were composed, but minutes before half-time Buffon had to make two critical saves to keep the scoresheet clean, first stopping Suarez's snap-shot down low with his left arm and then denying Nicolas Lodeiro from the follow-up.

Prandelli replaced Balotelli with midfielder Parolo at half-time, a tactical switch that suggested the Azzurri would happily hold on for the scoreless draw.

On 58 minutes Cristian Rodriguez sent a great chance wide of the target after a smart one-two with Suarez on the left flank.

Moments later, Marchisio was given his marching orders for his challenge on Egidio Arevalo.

The decision had the expected impact, and after Suarez burst through confidently on 65 minutes Buffon had to get down low to block with his arm.

Italy were still finding space, though, and a Pirlo through ball found Immobile only for the striker to be charged down as he was about to pull the trigger.

Prandelli replaced Immobile with Cassano, but despite Italy again finding opportunities on the counter Uruguay's insistence deep in Italian territory finally paid off.

The hosts gave away a corner, which Godin met with conviction to leave Buffon with no chance.

Italy rallied in desperation in the dying minutes, when Buffon ran up the field to leave his net empty, but to no avail.