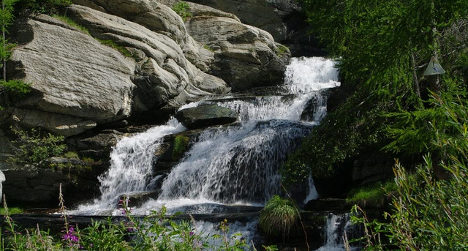 A section of the Lillaz waterfalls in the Aosta Vallery in North West Italy. Eliana/Flickr

A teenage British tourist has died from his injuries after jumping into the Lillaz waterfalls near Cogne at around 4.00pm on Sunday, Corriere della Sera reported.

The unnamed tourist jumped into the Alpine pool while taking part in the popular sport of “canyoning” which involves travelling through canyons.

The party had been staying at a campsite in Villeneuve and had arrived in Cogne by coach.

Accompanied by their own guides, they decided to go climbing in the waterfalls, which are at an altitude of 1,800 metres.

Although they were wearing wetsuits and helmets, they did not use ropes to lower themselves down the canyon, as is required in the sport, according to Corriere.

Members of the boy’s party tried desperately to resuscitate him before an air ambulance arrived on the scene a few minutes later and spent two hours trying to revive the teenager.

“Today there was a lot of water, the current was strong. And lots [of people] jump from the rocks there,” Dante Bibois, a guide responsible for alpine rescue in Cogne told Corriere on Sunday.

“There were no external signs [of life]. He probably hit the rocks violently with his chest,” he added.