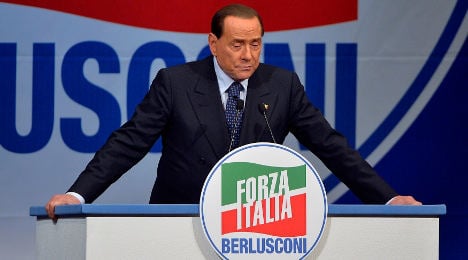 Berlusconi is currently serving a sentence for tax fraud and appealing his conviction for paying for sex with an underage prostitute. Photo: Andreas Solaro/AFP

The Forza Italia leader is not known for his support of gay rights but on Sunday made a rare expression of solidarity for Italy’s gay community.

“The [fight] for civil rights for homosexuals is a fight that in a truly modern and democratic country should be everyone's responsibility,” Berlusconi said, according to La Repubblica.

"As a liberal, I believe that through a broad and in-depth debate we can reach a reasonable objective for justice and civilization," the 77-year-old added.

Berlusconi made the statement the day after a number of Gay Pride marches were held across Italy, which saw tens of thousands of Italians take to the streets in support of gay rights. The remarks also came hours after his girlfriend Francesca Pascale and Vittorio Feltri, a journalist at Il Giornale, a newspaper owned by the Berlusconi family, signed up to Italy’s main gay rights organization Arcigay.

Writing in an editorial for the right-wing paper, Feltri said: “We are for freedom, without discrimination, convinced that it is necessary to overcome prejudice that generates misunderstandings, triteness and tedious and stupid insults.”

Responding to the news of its latest high-profile members, Flavio Romani, Arcigay’s President said: “Pleased to welcome Vittorio Feltri and Francesca Pascale among our members." But, he added, "membership to Arcigay also involves commitments.”

Berlusconi's statement appears to show a change in tune for the former prime minister who, in 2010 was infamously quoted as saying “my passion for women is better than being gay” as he fought of allegations of “bunga bunga” sex parties.

His remarks, which were widely reported in the international media, were immediately condemned by Arcigay. Speaking at the time, Arcigay's former president Paolo Patanè demanded an apology from Berlusconi, describing his attitude as “chauvinistic and vulgar”.

It is only one in a series of anti-gay gaffes. Further back in 2005 Berlusconi was quoted as saying: “In Italy only communists and gays are sanctified.”

Currently serving a sentence for tax fraud, convict Berlusconi is currently appealing his conviction for paying for sex with an underage prostitute and abusing his position as prime minister to get her out of jail.

The first appeal hearing fixed the date for the prosecution closing speech as July 11th, and said the verdict would be handed down on July 18th.