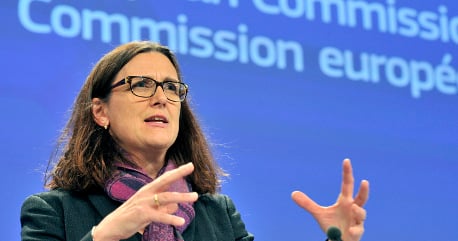 Cecilia Malmstrom, the EU's Home Affairs Commissioner, said no news funds would be allocated to Italy for its migrant situation. Photo: Georges Cobet/AFP

The economic bloc is, however, looking into how to “contribute even more", but only in respect to existing financial resources, in order to help Italy host migrants and refugees on its territory, Malmström said in a statement.

The announcement came a day after 30 bodies were found stuffed into the hold of a fishing boat from North Africa in an immigration crisis which has seen around 5,000 people rescued over the weekend off Italy's coast.

Several calls for more EU help have been made by both the Italian Prime Minister Matteo Renzi and his deputy, Angelo Alfano, in recent months with handling what is expected to be a record number of migrant arrivals this year.

The deaths of the 30 boat migrants has sparked anger and frustration in Italy and abroad, including from German President Joachim Gauck, who on Monday urged greater assistance for Italy.

A navy doctor said the migrants had "likely suffocated" in the tiny space, and "advised against removing the bodies" as it was not yet clear whether there were poisonous gases in the hold which might affect others.

Meanwhile, the anti-immigration Northern League (Lega Nord) has warned Renzi’s government that plucking asylum seekers and immigrants to safety from their rickety boats only encourages more people to set out across the Mediterranean for Europe.

"Another 30 dead in a boat. Another 30 deaths on the consciences of those who defend Mare Lorum," said Matteo Salvini, head of the Northern League party, in an ironic reference to the country's "Mare Nostrum" ("Our Sea") operation to rescue boat immigrants.

Salvini added in a Facebook post: "Renzi and Alfano's shirts are soaked in blood. Stop the departures, help them in their own countries, immediately!"

Maurizio Gasparri, the Senate leader of Silvio Berlusconi's Forza Italia party, blasted Renzi's "demented" navy operation and the "thousands of landings, deaths, tragedy, chaos. We cannot go on like this.”

In a statement, the navy said some of the 30 migrants may have drowned rather than suffocated, though it would not confirm whether there was water in the hold or how much.

Meanwhile, Jean-Claude Juncker, nominated on Friday to be the new European Commission president, said on Monday that he’s considering adding a commissioner for migration to his team.

“The issue will be debated after July 16th”, the day after the European Parliament vote on Juncker's candidacy, he was quoted on Rai News as saying.