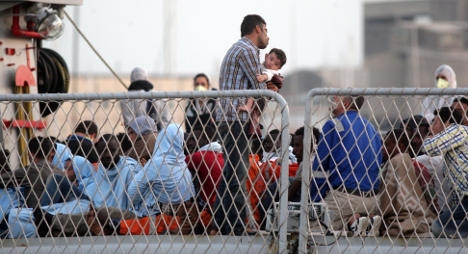 Survivors of a shipwreck off the coast of Italy in May 2014. Photo: Marcello Paternostro/AFP

A total of nine arrest warrants were issued, with five arrests being made in Sicily, Milan, Rome and Turin, Il Messaggero reported on Tuesday.

Police are still searching for four other people, one of which is thought to be in Sweden. Of the remaining three, one is believed to be in Rome and two in African countries, the newspaper said.

The arrests are the latest in an investigation launched last year, after 366 migrants died when the overcrowded boat they were travelling in sank on October 3rd.

The latest people sought by the anti-mafia authority (DDA) in Palermo, the Sicilian capital, are thought to be part of a transnational criminal organization trafficking people across the Mediterranean, Il Messaggero said.

Numerous searches have been carried out as part of the investigation, in which cash and money transfer documents were seized, enabling police to piece together the workings of the gang.

In addition to planning the journeys and onward travel of migrants, the gang is also accused of being involved in abuse of migrants. Survivors of the October shipwreck have testified to rape and torture at the hands of people smugglers.

A Somali man accused of raping Eritrean migrants appeared in court earlier this year, while a number of other alleged people smugglers have been arrested in recent months.