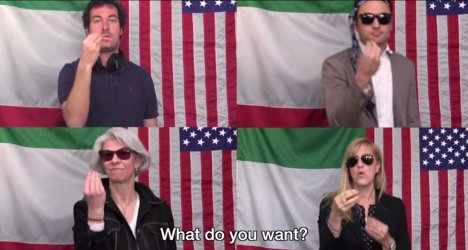 The US consulate's rap video was released on Wednesday. Screenshot: Consolato USA Milano/YouTube

Americans in Italy have a bad reputation for failing to learn the beautiful language, with some tourists firing questions at locals in English with little care for linguistic differences.

Now the US consulate in Milan has stepped in, going beyond the spoken word and offering a lesson in the art of Italian hand gestures.

SEE ALSO: Male models give lesson on language of love

A major in political science he may be, but Griffin appears to have learnt a thing or two from US rap culture.

Straight off the high-speed train, the music video’s star busts out lyrical twists – such as “tried to buy some wate,r they gave me some good wine" – to an eclectic range of backing vocals.

When not dancing in Milan’s famous shopping complex, the Galleria Vittorio Emanuele II, Griffin picks up helpful hand gestures such as “you are crazy” and “this is perfect”.

Consulate colleagues also get in on the language lesson, swinging their hands and hips to the beat and with the occasional appearance of a jar of nutella.