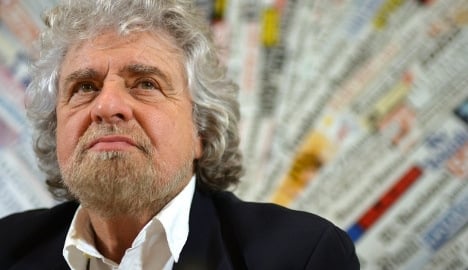 Beppe Grillo has told the EU to stop giving money to Italy as it "ends up with the mafia". Photo: Gabriel Buoys/AFP

Grillo, who recently teamed-up with fellow eurosceptic Nigel Farage, the leader of the UK Independence Party (Ukip), said during a news conference at the European Parliament in Strasbourg on Tuesday that funding for Italy disappears into the three mafia strongholds: Calabria, Sicily and Campania, "where there are mafia groups", such as the 'Ndrangheta and Camorra, Corriere reported.

Grillo's Five Star Movement (M5S) formed a partnership with Ukip after winning 21 percent of the vote in May's European elections.  The pair were in Strasbourg to give a speech as part of the newly formed  Europe of Freedom and Democracy (EFD) group.

"I came to check the bills and to tell the EU to stop giving money to Italy," he added.

Meanwhile, Grillo stuck up for Farage and fellow Ukip MEPs after they turned their back in protest as an orchestra played Beethoven's Ode to Joy, the EU's official anthem, at the opening of the session in Strasbourg, because they "don't recognize or respect the EU flag or anthem".

"It was used by Hitler [to celebrate his birthday], the biggest killer in history," Grillo was quoted in Corriere as saying.

Besides, he added, "the joy in Europe has gone."

"I love people like Farage, he's someone who has emotion," he continued.

"We've changed politics in Italy, and he wants to do the same in London. If I go wrong in Italy, I'll go and stay with him in London."