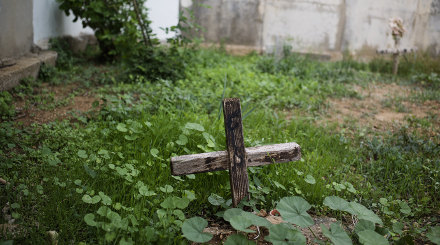 An unidentified grave of an migrant inside the cemetery of Lampedusa. Photo: Roberto Salomone/AFP

Police on Tuesday issued nine arrest warrants for suspected human traffickers, accused of being involved in the October 3rd disaster.

The breakthrough came after months of investigation, during which police wiretapped the suspects discussing the death of hundreds of their passengers.

In a police video of the recorded conversations, a trafficker named as John tells another gang member, Ermies, not to “cry over spilt milk”.

“You must concentrate on your work and don’t think about what people say…It’s their [the migrants’] fault because they wanted to leave in great numbers,” he was heard saying.

A total of 366 people, many fleeing Eritrea and Somalia, died when the overcrowded boat they were travelling in sank close to the southern Italian island of Lampedusa.

Later on in the conversation, dated October 31st, Ermies laments to John about the international attention the shipwreck attracted.

“A lot of other people have departed with other organizers, have never arrived at their destination and become fish food and no-one’s spoken about them,” he said.

Following the shipwreck José Manuel Barroso, president of the European Commission, flew to Lampedusa along with other politicians including Enrico Letta, then the Italian prime minister. The national government also upped efforts to save migrants by launching its “Mare Nostrum” (“Our Sea”) operation in the Mediterranean.

In the wiretaps, the accused traffickers also apportion blame to “destiny” rather than their own criminal organization.

“What happened depended only on destiny,” a man named as Alex says, while John in a later conversation also describes the migrants’ deaths as “their destiny”.

The people smugglers do, however, discuss the practicalities of what went wrong.

Alex names “two mistakes” made by a fellow trafficker on board: “the first was to throw away the satellite and the second was to light a fire without warning.”

John has another theory: “What went wrong is the fact that, on the boat, there were people who were there against their will…that were sold to the Somali that tortured and raped the women.”

One Somali man was arrested in Lampedusa following the shipwreck and faces charges of raping Eritrean passengers. In the recorded conversations, Ermies also refers to the practice of migrants being kidnapped and held to ransom.

The recordings also give away greater detail about the workings of the trafficking gangs, which often charge migrants over €1,000 for the dangerous journey from Libya to Italy.

“In my opinion more caution is needed, not putting more than 250 people on the same boat,” suggests John, who also discussed established norms such as when to depart and to ignore “complaints of the migrants”.