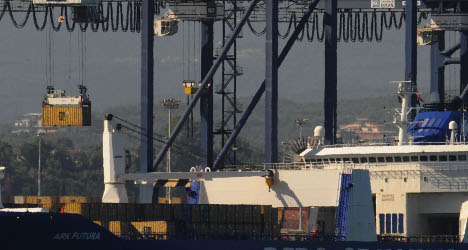 A crane transfers containers of Syrian chemical weapons from a Danish freighter to a US military ship on July 2nd. Photo: Mario Laporta/AFP

The first three containers to be transferred held a total of 20 tonnes of mustard gas. The remaining 75 contain the raw materials for Sarin nerve gas, among other things.

After three hours, with the vessels moored stern-to-stern within a wide safety zone set up around the port, 26 containers had been taken off the Ark Futura by crane and manoeuvred onto the MV Cape Ray by a vast climbing platform.

"Proud of Italy's contribution to international security, [and] a transparent operation which is environmentally safe," Italy's Environment Minister Gian Luca Galletti said on Twitter as the transfer began.

"For now everything is going well. We have put in a huge amount of effort…to manage the transfer operation smoothly," he said as he watched over the delicate procedure in the port of Gioia Tauro in the southern Reggio Calabria region.

The operation is being overseen by the Organisation for the Prohibition of Chemical Weapons (OPAC). Safety officials in the area are constantly monitoring for the possible release of dangerous toxins into the air.

Officials at the scene said between six and seven containers were being loaded onto the Cape Ray per hour.

Once the chemical agents have been safely transferred, they will be destroyed in international waters.

It marks the culmination of a programme to rid Syria of its chemical arms stockpile that followed chemical attacks in the suburbs of Damascus on August 23rd last year.

The transfer and disposal is the result of "the only positive, successful operation carried out on Syrian territory, which could open up new possibilities for disarmament and non-proliferation in the region," Foreign Minister Federica Mogherini said.

Despite government reassurances that the port was used to handling class 6.1 toxic substances – those liable either to cause death or serious harm through exposure – the procedure has sparked concern among local inhabitants.

Dozens of protesters gathered in the nearby town of San Ferdinando late on Tuesday, saying they were concerned over the possible health fallout from the Ark Futura, which they have dubbed "the poison ship".

"This is not a routine operation, it's a military operation and we are very worried," trade unionist Domenico Macri told AFP television.

"We have never carried out this type of operation in Gioia Tauro before. If there's an accident, a container breaks or falls, the substances which would come out could do serious damage," he said.

The protest group SOS Mediterraneo said destroying the weapons at sea risked having a devastating effect on Italy's pristine beaches and sea-side communities, with a spokesman saying "securing such dangerous agents should be done on land, in absolutely secure conditions."

The port has stepped up security for the transfer, sealing off access roads and barring entry to any non-authorized people, while a military helicopter flew overhead as the Cape Ray arrived before dawn. OPAC inspectors boarded the Ark Futura to check the cargo before the transfer began.

Once the Cape Ray moves back out into international waters, the process to destroy the agents and materials is expected to take between 45 and 90 days.

The US vessel has been equipped with two Field Deployable Hydrolysis Systems – portable treatment plants capable of "neutralizing" the most dangerous Syrian chemical agents.

The process should destroy more than 99 percent of the chemicals, reducing the lethal agents into a sludge similar to low-level hazardous industrial waste, which will then be disposed of by private waste treatment facilities.

Syria shipped out its stockpile of chemical weapons under the terms of a UN-backed and US-Russia brokered agreement to head off Western air strikes against the regime last year.