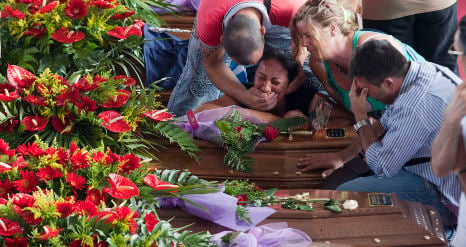 Mourners at the funeral held for those who died in the bus crash. Photo: Carlo Hermann/AFP

Gennaro Lametta, owner of Mondotravel company, was arrested along with two workers from the motoring authority, Corriere del Mezzogiorno reported.

The trio are accused of faking the vehicle's MOT just days after it crashed near Avellino, in Italy’s Campania region,as it returned from a pilgrimage on July 28th.

The bus hurtled off the road after its brakes broke and crashed through a poorly-maintained crash barrier, plummeting 30 metres.

Lametta is accused of working with Vittorio Saulino and Antonietta Ceriola, staff at the motoring authority, to produce the fake certificate. The three are facing charges of falsifying records and complicity in multiple manslaughter, Corriere said.

Vincenzo Figliolia, mayor of Pozzuoli where most of the victims were from, said he was left “embittered and indignant” by the revelations.

“Pozzuoli and the community have paid with blood [from] a series of presumed omissions, abuse and faults also by public employees,” Figliolia was quoted in the newspaper as saying.

The mayor said he was making an official request to Maurizio Lupi, Italy’s transport minister, to have all bus MOTs issued in recent years by the motoring authority in Naples checked.