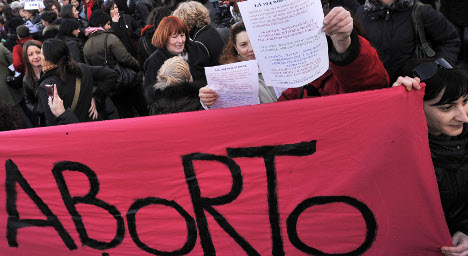 Ever since a Benito Mussolini-era ban on abortions as a “crime against the purity of the Italian race” was wiped out in 1978, thanks to a group of determined women, including the former foreign minister Emma Bonino, women in Italy are, by law, entitled to terminate a pregnancy within the first three months.

The so-called Law 194 was a giant leap for a country that is predominantly Catholic: before it was enacted, illegal abortions were the third-biggest cause of death for women, and several battles have since been won against those trying to revoke it.

But that doesn’t mean to say that women – many of whom would have endured a painful decision-making process – can easily access abortion services in Italy.

“The situation has got worse in recent years…There is a big problem with stigma in Italy,” Elisabetta Canitano, a gynaecologist and president of Vita di Donna, an organization that provides support to women over health issues, tells The Local.

In fact, several cases over the past year prove that, in reality, little has changed.

In March, 28-year-old Valentina Magnanti told a court in Rome that she went through 15 hours of excruciating pain before being forced to give birth in a hospital toilet after doctors allegedly abandoned her part of the way through a procedure to abort a foetus which, at five months, was severely deformed.

Meanwhile, a woman from Genoa had to call police to a hospital in the city over the Easter weekend after doctors there refused to assist her through the second stage of a medical abortion.

In other cases, women have been risking their lives by undergoing illegal abortions.

The problem with part of Law 194 is that doctors are also within their rights to refuse to perform an abortion on moral grounds, and over the past ten years the number of those choosing to do so has increased dramatically.

Massimo Gandolfini, a spokesman for the anti-abortion group Associazione Scienza e Vita, puts this down to doctors feeling “that abortion is fundamentally unfair and unjust”.

“The murder of a small human being is not part of a doctor’s cultural heritage,” he tells The Local. The group believes "there is no reason at all to justify the killing of a child" and is calling on women considering a termination to be "healed and assisted".

Silvana Agatone, a doctor at a hospital in Rome and president of the Free Italian Association of Gynaecologists for the Application of Law 194 (LAIGA), takes the opposite stance, arguing that performing terminations is part of a gynaecologist’s job and that, by law, hospitals must provide safe abortion services.

“The law gives women the choice to have an abortion in a safe and secure way, not in a secret, dangerous way, which is what many end up doing,” she tells The Local.

In the Lazio region alone, 80 percent of gynaecologists are “moral objectors”, with the figure standing at 70 percent across Italy, Agatone continues.

The situation is even more chronic in the south, with 90 percent of doctors invoking the conscience clause.

The biggest dilemma is finding doctors willing to perform abortions after 90 days, the period when the procedure requires more care and, especially if delayed, puts the mother’s life at greater risk.

Hospitals often rely on the help of outside medics if nobody within their institution will carry out the termination.

“In five provinces across Lazio, only two doctors give abortions after 90 days,” Agatone says.

“For an abortion at this stage, women have to go to the hospital and be monitored, to spend a few days there and to take tablets to ensure that it works properly.

“We need doctors providing this type of abortion to be within the hospital, not from the outside," she said, adding that "many women are forced to find a hospital in another city or travel abroad."

As the few non-objectors head towards retirement, another major concern is the scarcity of doctors trained to perform an abortion, Agatone adds.

“In university hospitals where no gynaecologist will give an abortion, the young doctors are not being trained.”

Agatone doesn’t lay the blame entirely on morality or religion either, “as many doctors who are against abortion still perform it.”

But needless to say, the Catholic Church plays a major role in influencing opinion, with the much-respected Pope Francis coming out in support of objectors earlier this year.

This has given fresh impetus to anti-abortion groups, which have organized several protests in recent months.

“The church meddles, it is a power battle,” Canitano of Vita di Donna adds.

Reputation also weighs heavily on the minds of doctors who are willing to perform abortions, she says, with medics who do so often being “pushed out of the system” or carrying out secret abortions.

“Genoa is a very Catholic city…if you do abortions you are out of the system,” she says.

“Doctors living in small towns especially, where everyone knows everyone and where they see the local mayor at church every Sunday, find it very shameful.”

In the late 1990s, that shame had a devastating consequence when a doctor killed himself after being exposed for carrying out abortions in secret.

“He was married and with a child…secret abortions are terrible for women and for the doctors who perform them.”