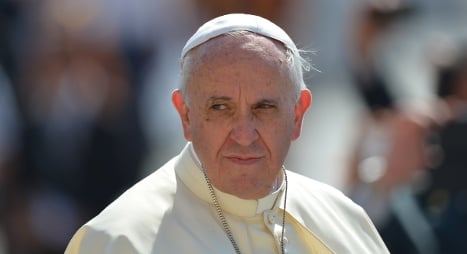 At his long-awaited first meeting with victims, the Pope reached out to the tens of thousands of people abused by priests globally, telling them he was sorry for the "grave crimes committed against you", and for the complicity of the Catholic Church in covering them up.

Three male and three female victims from Britain, Germany and Ireland stayed the night in the Pope's residence near Saint Peter's Basilica before having breakfast with Francis. Each then spent a hour with him in private.

The meetings come amid criticism that Francis has been slow to deal with the paedophile scandals which have hugely damaged the Catholic Church.

In a moving speech afterwards in his native Spanish, the 77-year-old pontiff spoke of the "toxic effect" of abuse, which he admitted had ruined many lives.

He criticised the "omission on the part of Church leaders" who covered up or ignored reports of abuse made by victims and family members.

Praising the bravery of victims, he said: "The courage that you and others have shown by speaking up, by telling the truth, was a service of love, since for us it shed light on a terrible darkness in the life of the Church.

"I look at you and…I ask for the grace to weep, the grace for the Church to weep and make reparation for her sons and daughters who betrayed their mission, who abused innocent persons," he added.

'Deaths on my conscience'

He said the "unrelenting emotional and spiritual pain" caused by abuse meant that some had to face "the death of a loved one by suicide".

Those deaths "weigh upon the heart and my conscience and that of the whole Church", the Pope added.

Francis said there was "no place in the Church's ministry for those who commit these abuses", adding: "I commit myself not to tolerate harm done to a minor by any individual, whether a cleric or not."

The victims who met the Pope were not identified to the press.

Vatican spokesman Federico Lombardi said it was hoped that the meetings would "open a constructive path" towards "healing the wounds".

The meetings had been hotly anticipated by victim support groups who have criticized the Argentinian for not acting sooner on an issue which has dogged the Catholic Church for over a decade.

While the Pope in May had branded the sexual abuse of children by clergy as a crime comparable to a "satanic Mass" and promised "zero tolerance", survivors questioned why a pontiff famed for his compassion had not met with victims.

Last year Francis strengthened Vatican laws on child abuse, which until then did not specifically outlaw paedophilia. Canon law, however, only covers clergy and lay people who work in or for the Vatican, not the Catholic Church as a whole.

A historic first trial against a former Vatican ambassador to the Dominican Republic is expected to take place after Polish archbishop Jozef Wesolowski was convicted of sex abuse by a Church tribunal last month and defrocked.

At the end of last year the Pope also set up an abuse commission to advise him on the issue, which includes Irish abuse victim and campaigner Marie Collins.

The eight-member commission, which met for the second time on Sunday, is keen to hear from experts from the Southern Hemisphere and developing world, where paedophilia is largely a taboo subject and where cases of abuse are much less likely to be reported.

In fierce language, Francis said paedophile priests "profane the very image of God in whose likeness we were created".

But the Vatican's continued insistence on keeping its inquiries into suspect priests secret has angered victims and campaigners.

In May, the UN Committee Against Torture said the Church had major failings in dealing with abuse cases, voicing concerns about a cover-up culture and calling for alleged paedophiles to be suspended immediately pending investigation.