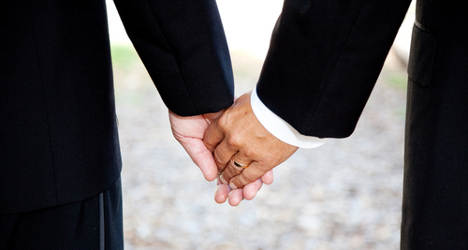 The politicians of Rome’s 13th municipality were yesterday discussing the creation of a civil union register when a group of centre-right councillors, along with members of the far-right, invaded the hall.

The protesters were from Silvio Berlusconi’s Forza Italia party, the New Centre-Right (NCD) led by Interior Minister Angelino Alfano, and the Brothers of Italy (FdI) party.

“They came here with external people and created a bit of chaos, so we couldn’t conclude our work,” Valentino Mancinelli, president of the municipality, told The Local. Despite both Alfano and Berlusconi recently saying they were open to debating civil unions for gay couples, Mancinelli said other municipalities have faced protests over creating a register.

The council president would not be deterred, however, saying the meeting would be rescheduled and civil partnerships “will probably be discussed at central city hall soon”.

Whereas at the moment each of Rome’s municipalities make their own rules for civil partnerships, Mancinelli hoped soon they would be centralized so that “all citizens can have the same opportunities”.

Responding to the stunt, municipal councillors from the political left said in a statement that approving civil partnerships would not be stopped by “these acts of intimation”.

In a separate note Giulia Tempesta, the Democratic Party’s vice-leader in city hall, described the stunt as “theatrical, popularity-seeking and anti-democratic”.

“Evidently it’s not clear to the municipal councillors from the right that Mussolini’s rule finished a long time ago and that the fight they conducted in the hall today was against a democratic process,” Tempesta said.

The protest was also met with ire by Andrea Maccarrone, president of the Mario Mieli Society for Gay Culture, who praised councillors from the left working “in a climate of unjustified political violence.”