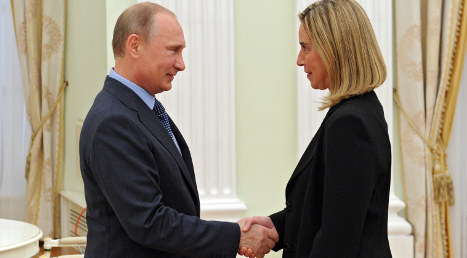 During talks with Italy's foreign minister, Federica Mogherini, in Moscow on Wednesday, Putin said: "The Italian presidency of the EU is an opportunity to bring the relations between Moscow and Europe to the same level of relations between Russia and Italy,"  according to a report on Rai News.

Mogherini also visited Ukraine earlier this week in a bid to help broker a ceasefire between the country's army and pro-Russian forces. Italy took over the six-month rotating EU presidency on July 1st.

Putin also agreed on Wednesday to fresh talks aimed at ending the conflict in eastern Ukraine and said Russia would renounce its use of military force in the country.

His announcement came ahead of clashes in eastern Ukraine on Thursday, in which three Ukrainian soldiers were reported to have died while 27 were injured.

Mogherini has called for a "democratic solution" to the conflict.

Relations between Italy and Russia got back on track last year after a rocky period, with a meeting between Putin and former Italian prime minister Enrico Letta in Trieste in November ending with the pair playing the piano together.

READ MORE HERE: 'Italy-Russia deal is equal to one with drug cartels'

Silvio Berlusconi, the former Italian prime minister currently undertaking community service for a tax-fraud conviction, is also considered to be a close friend of Putin. The pair caught up for dinner during Putin's visit to Rome in November.

Putin also stuck up for his friend during his tax fraud trial, sparking controversy last September by saying Berlusconi would not have gone on trial for sex with a minor if he was gay.

"Berlusconi is on trial for living with women, but if he were a homosexual, nobody would dare touch him," Putin said during a discussion with international experts and journalists at the Valdai Club in Russia's northwestern Novgorod region.