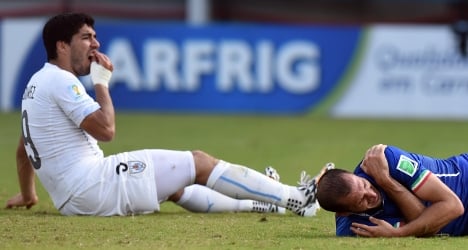 Football's governing body said had rejected appeals by Suarez and Uruguay officials over the severity of his ban.

A Fifa statement said the decision was not binding, meaning Liverpool star Suarez could still appeal to the Court of Arbitration for Sport (Cas).

Suarez was thrown out of the World Cup and banned from all football activity for four months after being found guilty of biting Chiellini.

It was the third time Suarez has been found guilty of biting an opponent in his career.

The 27-year-old initially denied any wrongdoing. He later issued an apology admitting Chiellini had "suffered the physical result of a bite" as a result of Suarez's actions.

If Fifa's ban is upheld, Suarez will not play football again until late October.

A nine-match international ban also means he will miss all or most of Uruguay's campaign in the 2015 Copa America.

"Now inside me there's no feelings of joy, revenge or anger against Suarez for an incident that happened on the pitch," he tweeted late last month.

Suarez has been strongly linked with a move to Barcelona, a deal that seemed to edge closer on Thursday after the Spanish giants completed the sale of Chile's World Cup star Alexis Sanchez to Arsenal.