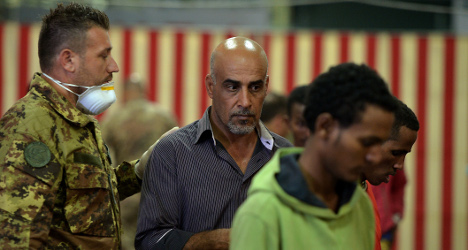 As rush-hour buses trundle down Rome’s Via Nazionale, just a stone’s throw from Italy’s presidential palace, a group of men enjoy their morning coffee and pastry.

But these are not the Italian businessmen who each morning tussle for space at the coffee bar, drinking their shot of caffeine at lightning speed.

This breakfast ritual is unfolding underground, at the Joel Nafuma Refugee Center (JNRC), in the crypt of a church which has opened its doors to those in need.

In the open hall a few dozen men file past a kitchen hatch, where enthusiastic volunteers hand out a watery cup of coffee and a pastry to each person.

There is no dress code to join this informal breakfast club; some come in shirts, others in “Italia” sports tops. The common language is Italian one second, English the next.

The majority of people hail from Afghanistan, Pakistan and Mali, while numerous other nationalities are also represented. Many have spent months travelling to Europe, often making the perilous boat journey across the Mediterranean which has claimed around 500 lives so far this year.

While some of the those at the centre arrive enthusiastically, greeting eachother with “Buongiorno!”, many file down the line weary and silent. The latter are most likely the people who are forced to sleep rough, says Piero Rijtano, an Italian who works at the day centre.

Others travel from the outskirts of the city from camps set up for new arrivals, where conditions are described as “sub-standard”.

Volunteers at the JNRC try to make up for what their guests may lack at night, by offering basic toiletries and clothes. New socks are snapped up as soon as they arrive, one volunteer tells The Local.

The room becomes a hive of activity after breakfast, to the soundtrack of a bouncing table tennis ball. As well as giving people the chance to relax in the centre, decorated with bundles of balloons, workshops are offered on activities such as art therapy and craft-making.

But the most important lesson of all, Rijtano says, is linguistic. “Not a lot of Italians speak English so if someone wants to work here, they must learn Italian. Everyone has this urgent need,” he says.

Even those who can master the language, however, know all too well that getting a job in Italy can be an impossible task.

“Refugees don’t want to stay in Italy, because they know they can’t find work, but at the same time they have a better chance to get refugee status here than in other [European] countries,” says Rijtano.

An Afghan man at the centre had recently arrived from Norway, where his asylum application had been rejected, paying more than €800 to people smugglers. The Italian authorities have now offered him an interview, in which he hopes to prove that he is in danger if returned to his home country.

But for him and many other asylum-seekers in Rome, there are few opportunities to make a life for themselves. During the summer months a few of the JNRC’s regulars head south to work as farm labourers, while others become beach vendors.

Unemployment is a national problem, affecting Italians across the country, and not one which can be changed overnight. Nevertheless, Rijtano believes some steps can be taken to improve the way Italy deals with the thousands of newcomers arriving each year.

“Help at the first stage is extremely important,” he says. “Resources for the initial welcome should allow people to have the minimum level of cultural and linguistic integration to try and find work.”

Mirroring the view of some of Italy’s leading politicians, Rijtano argues: “Europe should be accountable for the situation, because Italy doesn’t have any more resources.”

The JNRC itself is privately funded through the church, St Paul’s Within the Walls, a clear sign that the cash-strapped state lacks the necessary funds.

While at the moment visitors to the centre are relying on the help offered, Rijtano says they have the potential to make a positive contribution to Italy.

“In England and other countries that are used to immigration, it is seen as more of a resource than a problem,” he explains.

“I remember the first time I went to London, it was a revelation! Now in Rome there are a number of communities, and it’s beautiful to see.”