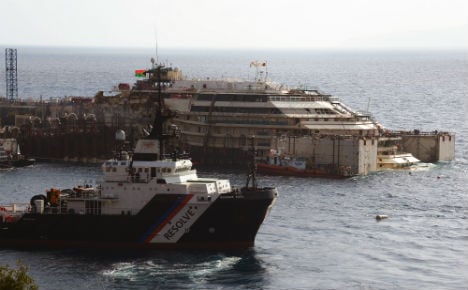 A tugboat is seen near the wrecked Costa Concordia cruise ship that lays off Giglio Island on July 12, 2014. AFP Photo/Vincenzo Pinto

The refloating of Italy's ill-fated Costa Concordia cruise ship is set to begin Monday, with a high-risk salvage operation to raise the rusting hulk ahead of its final journey to the shipyard where it was built.

Over two and a half years after it crashed off the island of Giglio in a night-time disaster which left 32 people dead, the plan is to raise and tow away the 114,500-tonne vessel in an unprecedented and delicate operation.

"The most critical phase will be the first day, raising the wreck for the first time. Refloating a passenger ship this large has never been attempted before," South African Nick Sloane, who is in charge of the salvage, told AFP.

The ship was rotated upright off its side in September and is currently sitting on a vast underwater platform.

Thirty tanks or "sponsons" that have been welded to the sides will work as a gigantic pneumatic system to raise it.

Under the eyes of the world's media, the operation is expected to start on Monday with workers pumping compressed air into the sponsons to lift the Concordia by two metres.

In a worst-case scenario, some warn the hull could break apart and spill its rotting innards into the Tuscan Archipelago, one of Europe's largest marine sanctuaries.

"We're talking about a floating city kitted out for thousands of passengers, with gallons of pollutants such as oils, detergents and sewage chemicals still inside," said Giorgia Monti from Greenpeace, which is sending an observational team to monitor the operation.

Tug boats would then drag the wreck 30 metres (yards) east and secure it in place with anchors before it is slowly buoyed another 10 metres, with engineers checking each deck for fresh structural damage as they emerge from the sea.

All maritime traffic in the area will be blocked during the most delicate phases.

A team of experts will manage the operation from a control room under the guidance of Sloane, who has described the salvage as his "most challenging" yet in a career that has taken him to six continents and two warzones.

The whole procedure is expected to take around six days.

On or around July 20, the plan is then to tow the Concordia at two knots an hour some 240 kilometres (149 miles) north to the port of Genoa.

Sailing up the Corsica channel past the islands of Elba and Capraia, it is expected to arrive in Genoa on July 24 — weather permitting — where it will be scrapped near the same shipyard it was built and launched back in 2006.

Salvage costs so far are estimated at around €1.1 billion  ($1.5 billion), including €100 million for the scrapping.

The luxury liner — twice the size of the Titanic — crashed into rocks just off tiny Giglio island in January 2012 and keeled over with 4,229 people from 70 countries on board.

The ship's captain Francesco Schettino is currently on trial for manslaughter, causing a shipwreck and abandoning the vessel before all of the passengers had been evacuated.

The body of one of the victims, Indian waiter Russel Rebello, is still missing and his remains may be found during the refloating or dismantling of the vessel.

The four-day journey to Genoa is fraught with possible environmental hazards.

A police video released this month showed rotting sofas, computers, books and shoes littering the inside of the liner and there is concern that the debris could float out during the trip.

The ship is also expected to leak some of the 263,000 cubic metres of polluted water flooding its lower decks, while fears remain for the estimated 100 tonnes of fuel which it was not possible to syphon out when the tanks were emptied after the crash.

Costa Crociere, the ship's owner and Europe's biggest cruise operator, insists the amount of liquid leaked will be comparable to that discharged by any vessel crossing the area — which it says is one of the most trafficked in the Mediterranean.

One counter-measure is that spotters will sail in a boat alongside the Concordia to make sure that schools of dolphins, fin whales and sperm whales in the area are kept well clear of the wreck.