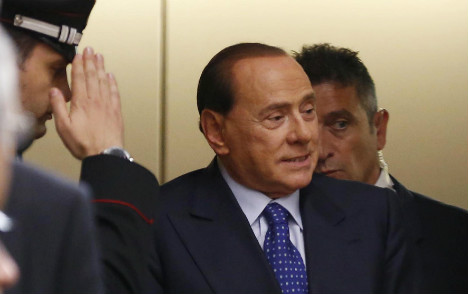 Prosecutor Piero de Petris said the sentence handed down last year had been "severe" but "irrefutable", as the court prepares to issue a ruling in the case on July 18.

Berlusconi was not present in the courtroom as the billionaire tycoon is doing community service in an old people's home near Milan for a separate conviction for tax fraud, which also led to his expulsion from parliament.

Berlusconi's main lawyers were not present at Friday's hearing as they are themselves being investigated for allegedly bribing witnesses during the original trial.

Berlusconi was sentenced in June 2013 in what has become known as the "Rubygate" case, which focussed on raunchy parties hosted by Berlusconi at his sprawling villa.

The ageing playboy was found guilty of having sex for money with then 17-year-old exotic dancer Karima El-Mahroug, better known by her stage name as Ruby the Heart Stealer.

He was also convicted of putting pressure on police to have her released from custody after she was detained for petty theft, apparently concerned she could reveal their liaison.

Many of the witnesses in the original trial were young women who attended the Berlusconi parties and described them as "elegant dinner parties", prompting prosecutors to look into the possibility of witness tampering.

A ruling against Berlusconi could be appealed again at the supreme court. If Berlusconi loses that final appeal, he would face either house arrest or community service.