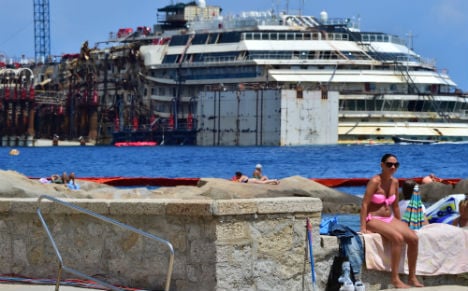 "The weather forecast is not ideal but sufficient to allow the start of the operation," said Franco Gabrielli, head of the civil protection agency which is overseeing the project.

The ship keeled over and began sinking and many were forced to jump into the sea or slide down its hull in the panic.

Thirty-two people lost their lives in the disaster.

The operation to remove the cruise ship from the island and tow it away for scrapping in Genoa in northern Italy is the largest salvage of a passenger ship ever attempted.

It is expected to take several days and ship owner Costa Crociere, Europe's biggest cruise operator, said the expected date for the start of the towing is July 21.

Maria Sargentini, head of the committee in charge of checking for environmental risks, said she was "optimistic" about the operation despite warnings from some campaigners that the ship could break apart and cause massive pollution.

But she added: "The operation has a margin of risk".

The ship's captain Francesco Schettino is currently on trial for causing the shipwreck, manslaughter and abandoning the ship before the evacuation was complete.

Four other crew members and an executive from Costa Crociere have already plea-bargained.