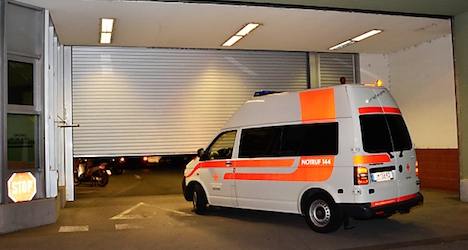 Close to a hundred refugees, most of whom appear to come from Syria, were intercepted on a train traveling into Austria from Italy. Photo: APA (zeitungsfotos.at/Liebl)

The train was inspected in Tyrol, and was found to contain 44 men, 22 women and 28 children with Syrian origin.

They were offloaded from the train, and taken to the police headquarters in Innsbruck for initial questioning before being offered housing and assessment by the Red Cross.

According to the so-called Dublin II Regulation governing the treatment of refugees, potential asylum seekers must be sent back to the first EU country in which they arrived, which in this case is Italy.

The Italian government is obliged to handle any requests for asylum, as that is the country where they presumably first arrived in the European Union.

State police informed journalists that this is one of the largest seizures of refugees found in the Tyrol for many years.

Italy has experienced a record influx of refugees for many months, and has complained that it has repeatedly been let down by its European neighbours, and left to deal with the problem alone.

Austria announced at the end of June at an international conference in Geneva that it would take care of resettling 1500 refugees in the country.

The number of asylum applications from Syrian refugees in Austria shot up between January and April 2014. According to the asylum statistics of the interior ministry, published in May, there were 1269 Syrian applications in the first third of this year. This was a 213 percent increase compared to the same time last year.

Last year, 1686 Syrians applied for asylum in Austria of their own accord. Of these, 667 were given asylum, 157 were denied. The government said that it would not send people back to Syria because of the war, but also did not grant all of them refugee status.