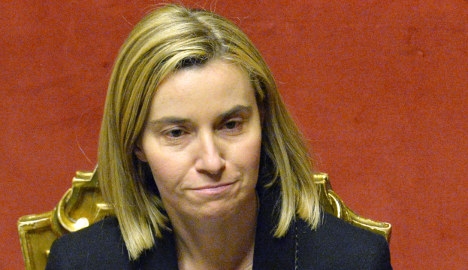 Mogherini, who is seen as a possible candidate for European Union foreign policy chief, will hold talks with Israeli Prime Minister Benjamin Netanyahu and Palestinian President Mahmoud Abbas between Tuesday and Thursday, the ministry said.

She will then travel to Egypt, a traditional mediator in the Middle East conflict, between Friday and Saturday.

"The Israeli-Palestinian conflict has devastated too many generations,” Mogherini said in the statement.

“It requires an immediate ceasefire. But not only that, now is the time for the international community to find the courage to end one of the longest wars in modern history.”

Mogherini has also spoken to Germany’s Foreign Minister Frank-Walter Steinmeier, who will also travel to the region on Monday. Steinmeier is expected to hold talks in Israel, the West Bank and Jordan.

Steinmeier was expected to discuss an international push for a ceasefire in Gaza with US Secretary of State John Kerry and his British and French counterparts in Vienna on Sunday.

Israel stepped up its campaign in Gaza on Sunday, warning Palestinians in the north to flee after marines mounted a ground attack.