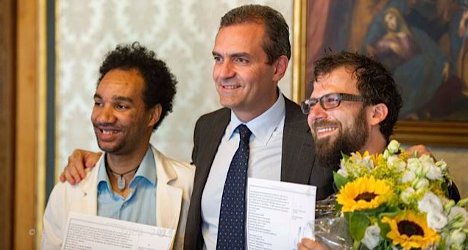 Roberto, from Naples, and his husband Miguel were greeted by Mayor Luigi de Magistris at city hall on Monday morning, where the couple formally added their marriage to the civil register.

While same-sex unions are currently illegal in Italy, De Magistris recently announced that his administration would begin registering the marriages of gay citizens who wed abroad.

Roberto and Miguel married in Spain and flew to Naples to have their union recognized by the city authority, which had been expected to happen at an earlier date in July.

READ MORE: First gay marriage to be registered in Naples

Speaking to The Local today, Roberto said he was delighted at the response he had received in Italy.

“I am very happy; our personal story is considered exception. The registration is symbolic for Italian society,” he said.

“In practical terms, it changes my Italian identity card to say I’m married. It’s absurd that I’ve been married since 2008 but in Italy my identity card still says I’m single!”

Roberto and Miguel live in Madrid, where the Italian says they are treated “like everyone else.”

“There are some people that don’t agree [with gay marriage], but they’re the minority and don’t impose their view,” Roberto said.

Although gay weddings cannot be held in Italy, politicians from the right have recently opened up to discussing civil unions. Silvio Berlusconi, leader of Forza Italia, recently voiced his support for gay rights while Interior Minister Angelino Alfano, head of the New Centre-Right, said his part was willing to discuss civil partnerships.

READ MORE: Berlusconi speaks out in support of gay rights

But for Roberto, more still needs to be done: “Italy should have a marriage law; we’re behind in respect to the rest of the developed world.”

“The reality for couples, including straight ones, is a lot more complicated than Italian law recognizes…the law should reflect the reality.”

He also called for a law combatting homophobia and transphobia, in addition to provisions to allow gay couples to adopt.

Although being able to register his marriage in Naples is a step forward for gay rights in Italy, Roberto pointed out that many couples lack such an opportunity.

“Not everyone in Naples or Italy has the chance to go abroad and come back; they need a national law. We are equal,” he said.