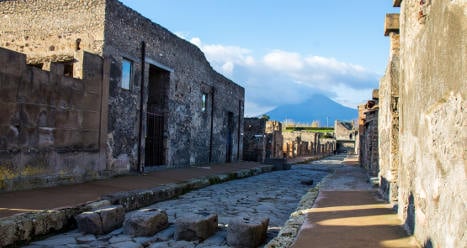 Italy has until the end of 2015 to finish restoration work on Pompeii. Photo: Kimberley Ross

During a visit to the site near Naples on Thursday, European Regional Policy Commissioner Johannes Hahn said the project must be finished by the end of next year or 75 percent of the €105 million budget earmarked for the site “will be lost”, according to a report in La Stampa.

Hahn added that 25 percent of the budget allocated has been tapped into by the Italian government but only €1.5 million has been spent on the site.

The funding, approved by the European Commission in March 2013, was set to be combined with the same amount from Italy.

The move followed a UNESCO report in January of the same year which documented structural shortcomings and light damage at the 44-hectare site in the shadow of Mount Vesuvius, where collapsing walls and houses have sparked international concern.

The giant eruption of Mount Vesuvius devastated Pompeii in 79 AD but the ash and rock helped preserve many buildings almost in their original state, as well as the curled-up corpses of victims.

The site has long been a sponge for funds used poorly or syphoned off by criminal organisations.

Cabinet Secretary Graziano Delrio admitted on Thursday that “there have been some delays”, mainly due to the cumbersome tendering process for projects worth more than €50 million, but that Italy is “ready to accept the challenge” and will "work through the night" to meet the deadline.

Italy’s Culture Minister Dario Franceschini said the project is “a challenge for the whole country” because “in the era of globalization, countries need to find a vocation that makes them stronger”.

“And in Europe, with Italy, they can invest in natural beauty and culture.”