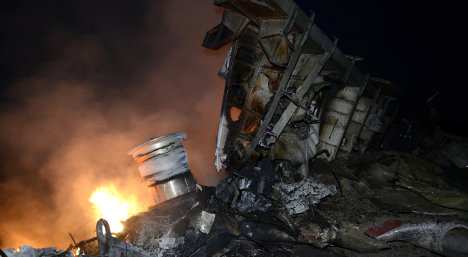 The wreckage of the Malaysian Airlines jet, which was carrying 298 passengers. Photo: Alexander Khudoteply/AFP

“From information provided by the airline and Dutch authorities, an Italian-Dutch citizen and his son [were on board],” a statement from Italy’s Foreign Ministry published said, adding that it was in contact with both to ascertain if there were any more Italian citizens on board.

The Boeing 777, travelling from Amsterdam Schiphol to Kuala Lumpur, was blown out of the sky at 10,000 metres, by what US officials claim was a Russian-made surface to air missile.

Russia's President Vladimir Putin has blamed the Ukrainian government, saying the tragedy would not have happened if it had not escalated the war in eastern Ukraine, while the Kiev government blamed the pro-Russian rebels for shooting down the plane.

US vice president Joe Biden, meanwhile, described the plane as being "blown out of the sky".